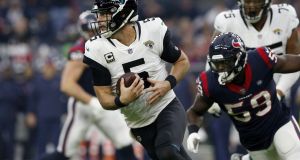 The chief marketing officer of the Florida-based American football team, the Jacksonville Jaguars, will be one of the keynote speakers at this September’s One-Zero conference. Photograph: Tim Warner/Getty Images

Sports technology is expected to take centre stage in Dublin as the city plays host to a conference focusing on navigating the changing business of sport.

One-Zero 2019 will take place on September 17th at the Aviva Stadium. It marks the merger of three events, with the Irish Sponsorship Summit and the Fan Engagement Conference combining with One-Zero.

“At a time when the traditional models of sport are being challenged by technology-fuelled disruption, we want to help our audience understand these changes, so they’re better equipped to navigate the future,” said Patrick Haslett, chief executive of One-Zero.

The day-long event is expected to host up to 500 people, but there are already plans to grow it further next year, adding a second day to the event. “Patrick has got a great vision,” said One-Zero co-founder Ross O’Dwyer. “He wants to grow it year on year, but he doesn’t want to dilute the product.” One option could be to create smaller events overseas, with main conference staying in Dublin, he said.

Dublin City Council is partnering with the event to host this year’s conference, with IDA Ireland and Fáilte Ireland also supporting the event.

1 Retailers accused of ‘stealing business’ from rivals by flouting restrictions
2 Outgoing Irish a sitting duck for Covid
3 In praise of Gogglebox Ireland, an essential service in all but name
4 Guinness brings out a non-alcoholic version of the black stuff
5 Nama grants Ronan four-month extension on €160m glass bottle site deal
Real news has value SUBSCRIBE