Dublin phone boxes could be replaced with digital kiosks 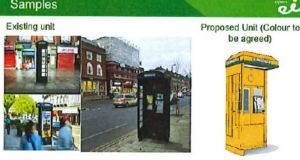 A slide from a 2017 Eir presentation on digital kiosks. Photograph: Dublin City Council

Several of Dublin’s existing pay phones could be turned into “digital pedestals” under plans being considered by Eir and the city council.

The new kiosks could include wifi hotspots and digital displays used for public messaging and information on events across the city.

Eir has responsibility for phone boxes throughout the country, and operates a programme for removal of derelict or unnecessary kiosks. Today people frequently use public phones to access homeless services.

Documents released under the Freedom of Information Act show that in late 2017, 144 pay phones remained in 82 locations in the Dublin City Council area.

Presentation slides delivered to the city council show an option being considered at the time included the council, Eir and media company Clear Channel developing “a commercial partnership to install a new digital pay phone structure in some key locations and remove all other existing kiosks and pedestals”.

Eir said potential benefits of this would include revenue-sharing, smart city enhancement, shared access to the display screen and digital marketing. In later documents Eir said the “digital pedestal option to replace existing kiosks is predicated upon a baseline number of 20 structures to make the proposal viable”.

Then in April 2019, Eir sent an email to the council’s environment and transportation department saying the plan was “to look for internal agreement to remove all kiosks that are not being converted to a digital kiosk. So I’m waiting till final agreement on locations. Once I have that I’ll remove everything else.”

Campaigners in the UK have warned that digital kiosks which have replaced phone boxes in many locations there act as a surveillance network.

“The infrastructure for building a surveillance network is being installed on British streets,” said Adrian Short, a data analyst as reported in the British Independent newspaper.

A spokeswoman for the city council said the planning department wanted to “rationalise” the number of obsolescent phone boxes in the city.

“This would be with a view to seeking to modernise any remaining infrastructure for public benefit, and to support Dublin’s competitiveness for tourism and investment. This may include provision of wifi hotspots and dynamic digital displays that support local business and also allow for the promotion of public messaging and events across the city.”

However, an Eir spokeswoman said no plans have been agreed to change the city’s phone boxes. “As with our entire infrastructure Eir will continually review and improve the services we offer to our customers to ensure that we continue to meet their needs.”