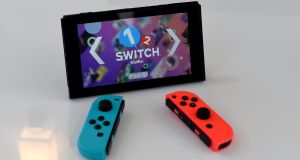 The Nintendo Switch has been viewed by analysts as a “critical test” as to whether Nintendo should continue making hardware. Photograph: Timothy Clary/AFP/Getty Images

Shares in Nintendo jumped following the worldwide launch of its Switch console as fans queued up for a device whose success hinges on whether home consoles can thrive in the mobile gaming era.

Friday’s 3.7 per cent rise was accompanied by long queues at retailers in Tokyo, London and New York as gamers brushed aside the high starting price of $299.99 (about €285) for the Switch, which aims to bridge home and portable games devices with a single machine.

The release of the Switch follows Nintendo’s first serious foray into mobile gaming with the December launch of Super Mario Run which has been downloaded 78 million times.

If the Switch is successful, analysts say the Japanese company – also known for its Zelda and Donkey Kong characters – may be able to capture a new layer of fans from the mobile gaming space. But if it disappoints like the Wii U, one of Nintendo’s worst-performing consoles, it could endanger the future of the group’s hardware strategy.

“This console will be a critical test as to whether Nintendo should focus on its intellectual property portfolio and whether it should continue making hardware,” said Kazunori Ito, an analyst at Morningstar.

The Kyoto-based gaming giant is hopeful the Switch can provide a new entertainment experience, where players look at each other in the eye rather than the screen in some games and shake the twin “Joy-Con” controllers, which are removable, motion sensitive and reminiscent of the wand that helped Nintendo’s Wii revolutionise console gaming in 2006.

The company has said it plans to ship 2 million Switch units in the first month of its launch. Despite promises of 80 impending titles and strong support from third-party games makers, the launch line-up was thin with just two titles: The Legend of Zelda: Breath of the Wild, and 1-2 Switch.

Researchers at SuperData estimate that Nintendo will sell 5 million units by the end of this year, saying the biggest challenge is to convince consumers to purchase the Switch as a second device for many who have already purchased Sony’s PlayStation 4 or Microsoft’s Xbox One.

The launch price tag came in higher than the $250 that most analysts had expected as Tatsumi Kimishima, Nintendo’s president, promised to sell the Switch at a profit from day one.

1 How safe is it to go back to the office?
2 Elderly parents living in property you own will save you on capital gains tax
3 Owner of Dundrum Town Centre to sell prized assets
4 Construction workers among first PTSB borrowers off payment breaks
5 More than 40% of help-to-buy recipients already had deposit
Real news has value SUBSCRIBE