New console goes on sale for €329.99 and carries Japanese maker’s fortunes on its shoulders 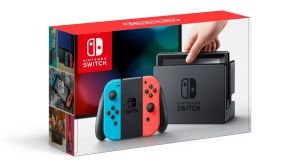 The new Nintendo Switch game console, on sale on Friday

There will be sleeping-bag queues, “sold out” signs, and disappointed fans from Sapporo to San Diego. On the face of it, very little about Friday’s launch of the Switch console seems unpredictable, because Nintendo has been playing the same launch-hype game for more than 30 years.

Nintendo has said that some two million Switch units will be available for the worldwide launch, and pre-orders already suggest the fan base is itching for ownership. The machine arrives with a strong portfolio of reviews and two launch titles (The Legend of Zelda: Breath of the Wild, and 1-2 Switch) that will, for some, justify the €329.99 cost of the console on their own.

If early shortages do appear acute, the company may face the familiar accusation that it has engineered the whole thing. A Nintendo executive may even offer an assurance such as “Believe me, creating a shortage of this kind was nobody’s design” – similar to the terms executives used when the world was scrambling for the original Nintendo Entertainment System (NES) and sold-out Super Mario Bros 2 in 1988.

However, behind the theatre of the Switch launch, games industry analysts say Nintendo is nervous as it re-enters the console arena – a games market evolving along lines that owe little to the past and where, for all its reach and tenacity, the Kyoto-based group no longer has control.

With Mario, Zelda and other game characters, Nintendo arguably has the industry’s best architects and raw materials for blockbusters, and gamers have duly been promised titles featuring those superstars in the first 12 months of the Switch’s life. Less clear is whether this new generation of console has what David Gibson, Macquarie analyst, calls the “gee-whizz” factor to create a new generation of Nintendo devotees from a market with cheaper and broader gaming options than ever before.

The Switch – a hybrid of home (plug into the TV) and handheld consoles – represents an unnerving experiment for the company. Nintendo, according to analysts eyeing the growth of mobile gaming and the success of Sony’s PlayStation4 console, has diminishing hopes of repeating the success of the Nintendo Wii console, which sold 100 million units worldwide, or the DS series of handheld machines that sold 153 million globally.

As Nintendo prepares to roll out what will be its ninth generation of hardware, some have suggested the Switch could be its last console. A few of the more vocal investors – arguing at a recent shareholder conference in Tokyo that the company would make more money if it gave up the hardware business and concentrated on software – would actively like the Switch to be Nintendo’s hardware swansong.

Others say the company is nowhere near drawing such a line, however well or badly the Switch performs.

Serkan Toto, a games industry consultant, says that unless it takes the world by storm, the new console’s performance will not be judged primarily against the success of Nintendo’s greatest hits – a line-up that includes the 1989 Gameboy handheld (118 million units sold), or the quirky but brilliant Nintendo 64 console (33 million units) – but against the Wii U: the console launched in 2012 that failed to capture gamers’ imagination and shifted fewer than 14 million units worldwide.

“For the Switch to be considered a failure, and to cause Nintendo to seriously reconsider the hardware business, it would have to tank even worse than the Wii U did, and I don’t think it is going to do that,” says Mr Toto, adding that the decision to merge handheld and home console elements gave Nintendo the chance of a “modest hit” with the Switch.

However, the change in atmosphere created by the Wii U disappointment is palpable, say software industry veterans who have worked with Nintendo. The sales failure visibly locked Nintendo behind the curve for the first time in decades: its attempt to regain the initiative through the Switch has seen its advertising shift away from children – and towards millennials, or young adults – for the first time ever.

When the great mid-1980s NES boom was covered by media in the US, consoles were still referred to as “toys”. Reporters favourably compared sales of the NES not with home computers or other technology, but with Barbie dolls. When Sega, with the Master System in 1986, then Sony with the PlayStation in 1995, and later still Microsoft with the Xbox in 2001, joined the fray, Nintendo made sure that it became a formidable opponent in a straight-up console war.

When Nintendo launched the Wii in 2006, drawing in a generation of new and “casual” gamers with revolutionary motion-sensitive controllers, the company still knew exactly where the frontiers of gaming lay.

“That was 10 years ago, though,” says Macquarie’s Mr Gibson. “Everyone plays games now. Is the Switch another Wii? No. Will it outsell the Wii U? Yes.”

1 Bank of Ireland sees more than 1,400 staff apply for redundancy
2 Air travel never going ‘back to way it was’
3 Coronavirus vaccine: 15 billion doses needed to inoculate the planet
4 South Dublin land at €19m has scope for up to 500 homes
5 Tesla’s value drops $50bn as Musk’s cheaper battery three years away
Real news has value SUBSCRIBE