Hailo brand drives off into sunset as MyTaxi arrives 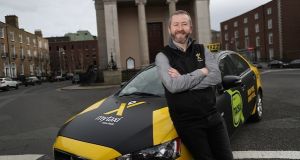 MyTaxi driver Robert Walsh in Dublin, one of 10,000 drivers using the app in Ireland.

Hailo is to officially become MyTaxi and roll out a number of new services for users this week, in a move that will see customers in Ireland able to use its app to hail cabs in more than 50 cities across nine countries.

As of this week, Hailo customers will be encouraged to migrate over to the new MyTaxi app with the company’s chief executive, Andrew Pinnington, optimistic that most users will do so within a few months. Both apps will be in operation initially although the Hailo version is to be phased out over time.

Hailo, whose app has changed the way many consumers hire taxis, launched in 2009 and became available in Ireland in April 2012. It also operates in Spain as well as Britain. MyTaxi, which was acquired by Daimler in September 2014, is currently available in Austria, Germany, Italy, Poland, Portugal, Spain and Sweden.

The service will also shortly be available in Greece after MyTaxi last month acquired Taxibeat, the country’s biggest e-hailing platform.

In Ireland, where 20 per cent of the population has registered with the app, Hailo has carried over 28 million passengers on nearly 19 million journeys. The company has over 10,000 registered drivers, 90 per cent of which have already migrated to the new app.

The app is free to use for passengers with taxi drivers typically charged a commission fee of 12 per cent for each booking.

From Monday onwards, most Hailo users will be directed to move to the MyTaxi app in a process lasting about 30 seconds that will transfer over credit cards details and other personal data. Business account customers will have to wait a few weeks before migrating due to individual customisation for companies.

Those opting to move to the new app will be able to avail of a number of new features, including the ability to hail taxis in over 50 European cities. Users will also be able to save drivers as favourites for future bookings and get price estimates for trips before booking.

“We’ve taken all the great things that Irish users love about Hailo and made sure we’ve added them to the new app while also bringing the benefits of the old MyTaxi solution so that customers get the best of both worlds,” Mr Pinnington told The Irish Times.

Under the all-share deal agreed last year, Daimler, the makers of Mercedes-Benz, owns 60 per cent of the newly merged group with former Hailo shareholders owning the other 40 per cent stake.

The merger came at a time of consolidation in the sector with many other traditional carmakers also acquiring transportation app-related companies. Last year, Volkswagen took a $300 million stake in the Israeli ride-sharing service Gett, while General Motors invested $500 million in Lyft.

Tim Arnold, MyTaxi’s general manager in Ireland, said the company had taken on additional staff in recent months ahead of the rebrand and amid expectations of future growth.

“We’ve seen incredible take-up among business users for Hailo in particular in recent years. It is the fastest-growing area for us in Ireland and compared to this time last year we have twice the number of business accounts active on the platform and we’re on the way to becoming the biggest supplier of taxis to the hospitality sector here,” he said.

Hailo originated when three entrepreneurs collaborated with some London hackney cab drivers to make it easier for people to hail cabs. The company received close to $100 million in funding prior to the recent merger with investors that included Accel, Union Square Ventures, Atomico, Wellingon Partners and Richard Branson.

However, while it enjoyed huge success in markets including Ireland, the company struggled in recent years, pulling out of the North American market in late 2014 after saying it was “impossible” to become profitable due to the battle between Uber and Lyft.

The company’s parent, Hailo Network Holdings Limited, made a £21.8 million loss in 2014 with £11.8 million of that loss linked to its North American business.