NBC Universal invested $500m in Snap as part of IPO

Shares jump 8.6% in early trading as NBC emerges as sole US media firm with a stake 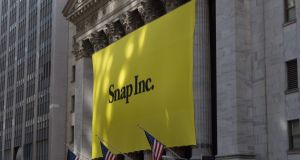 Shares in Snap jumped 8.6 per cent in early trading on the firm’s second day on the market. Photograph: Bryan Smith/AFP/Getty

Comcast Corp’s NBCUniversal said on Friday it had invested $500 million (€474 million) in Snap Inc as it continues to spend heavily on digital media companies.

The investment was made as part of the Snapchat owner’s initial public offering, NBCUniversal chief executive Steve Burke said in a memo to employees.

Earlier, CNBC reported that Snap’s stock allocation to NBCUniversal seems to be the only one made to a new strategic investor, making NBCUniversal the lone US media company with a stake.

Comcast has invested heavily in digital-native companies such as BuzzFeed and Vox Media, partly in an effort to better service existing advertisers.

“With the Snap investment, we have invested over $1.5 billion in promising digital businesses in the last eighteen months,” Mr Burke said in the memo.

NBCUniversal has already launched entertainment programmes such as The Voice, SNL and E! News’ The Rundown on Snapchat. The media company said it expects to launch more Snapchat shows in the coming weeks.

NBCUniversal has agreed to hold Snap’s shares for at least a year, according to the CNBC report.

Snap disclosed last month that it expected investors buying up to a quarter of its shares in the company’s $3.4 billion (€3.2 billion) initial public offering to agree not to sell them for a year.

NBCUniversal courted Snap co-founder Evan Spiegel for the past year, CNBC said, and both companies have been working on deepening their relationship.

Snap declined to comment beyond details noted in its prospectus and other US Securities and Exchange Commission filings.

1 How can I view my dead brother’s will if I’m not the executor?
2 Michel Barnier rejects UK’s call for Canada-style trade deal
3 Barry’s Hotel at €8m comes with potential to double in size
4 Applications for 961 new homes in Dublin and Meath rejected
5 Aqua Dome in Tralee could close over insurance claims, directors warn
Real news has value SUBSCRIBE