Spotify, which is unprofitable, generates almost all of its sales from subscriptions 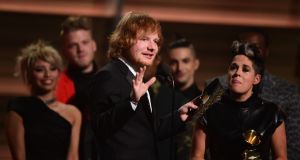 Ed Sheeran, who has soared to become the most popular artist of the moment on Spotify with 42.2m monthly listeners. Photograph: Robyn Beck/AFP/Getty Images

Apple Inc, owner of the second-largest paid service, said last month its streaming service has more than 20 million customers. Adding paying customers will help Spotify pitch investors, who expect the company to file for an initial public offering and are looking for signs the company can convert its growing subscriber base into a sustainable business.

Spotify, which is unprofitable, generates almost all of its sales from subscriptions, though the music service also has tens of millions of additional users who listen for free, supported by advertising.

Spotify charges a standard rate of $9.99 a month and also offers promotions and discounts, including a $4.99 plan for students.

Spotify and other paid streaming services have boosted the entire record industry. Recorded music sales grew 7 per cent in 2016, the fastest pace since piracy obliterated sales nearly 20 years ago, according to a report from Midia, a media research firm. Streaming accounted for $5.4 billion of $16.1 billion in global record sales.

While the growth has been good for most holders of music rights, it has also emboldened Spotify in negotiations with record labels.

Spotify hasn’t had long-term deals with any of the three major labels for months, and recent talks have reached a standstill, according to people familiar with the discussions who asked not to be identified discussing private business matters.

Spotify does face some pressure to make a deal with labels to help reassure IPO investors. And the clock is ticking. Investors in a previous fundraising round have the right to turn their stakes into shares at a discount to the IPO price, with the discount growing if Spotify takes longer to go public. On the other hand, the longer the labels wait to strike a deal with Spotify, the more users the service adds and the bigger its clout grows.