Shares in the owner of Snapchat open at $24 apiece, 41% above listing price 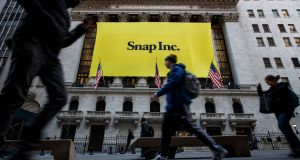 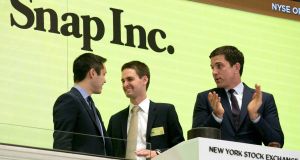 Shares in Snap, maker of the disappearing photo app Snapchat, floated on Thursday at a valuation at least twice as expensive as Facebook and four times more costly than Twitter.

Shares in the Los Angeles-based company started trading on Thursday morning on the New York Stock Exchange under the ticker SNAP. After ringing the exchange’s opening bell, chief executive Evan Spiegel and co-founder Bobby Murphy headed to Goldman Sachs’s offices in lower Manhattan to await the first trades, which saw the stock rise by 41 per cent above its listing price.

The shares opened at $24 apiece, at the top of expectations.

Snap sold 200 million shares in its initial public offering (IPO) at $17 each, according to a statement on Wednesday. At that price, it had a market value of about $20 billion, based on 1.16 billion shares outstanding after the IPO.

It’s a “nosebleed” valuation, but “there’s a nosebleed’s worth of demand”, said David Kirkpatrick, chief executive of Techonomy Media.

Snap raised $3.4 billion in its IPO, pricing shares above the marketed range, in the biggest social-media IPO since Twitter more than three years ago. It’s also the first tech company to list in the US this year.

“There is a huge amount of people who really just want to get in on the hot new thing, who see this as the first opportunity of its type in a number of years,” Mr Kirkpatrick said in an interview on Bloomberg TV. Still, “they’ve got some serious work to do to actually make a real business that makes profits”.

The company also needs to convince investors to put their complete trust in its management, as it is listing non-voting shares, the first company to do so in the US, according to its deal filing. That means stockholders will have no sway over matters such as director nominations and executive compensation, and they won’t be able to bring matters before the annual meeting. Co-founders and majority holders Mr Spiegel and Mr Murphy will be responsible for the decisions that lead to Snap’s success – or on the hook for its mistakes.

The trading debut may benefit from good timing: US equities set records on Wednesday on the heaviest trading volume so far this year. The S&P 500 index jumped 1.4 per cent to a record 2,395.96 in New York, the biggest single-day advance since the election. The Dow Jones Industrial Average climbed 303 points to 21,115.