What Snapchat’s blockbuster debut tells us about the stock market 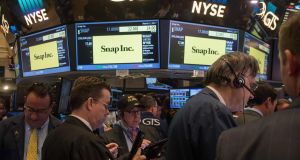 Traders work on the floor during the Snap Inc IPO at the New York Stock Exchange. Photograph: Getty Images

A tell-tale sign of a booming equity market is a hot technology listing and the blockbuster debut by Snap, duly summonsed memories of the dotcom era.

Shares in the parent of the popular messaging app surged more than 40 per cent in their New York Stock Exchange debut where the fresh faced co-founders rang the opening bell to cheers from the trading floor.

While the company lost more than $500 million last year and faces questions over its corporate governance as well a heightened competition from rival Facebook, it effortlessly achieved a market valuation of nearly $30 billion. That puts Snap on par with the likes of the century-old Kellogg’s, but a fraction of Facebook and Google at nearly $400 billion and $600 billion, respectively.

Three factors help explain why Snap was a hit on Wall Street and raised $3.4 billion in fresh capital from investors - starting with a compelling sense of timing.

Investors have consistently pushed US equity benchmarks into record territory in recent months, prompting talk of a return of “animal spirits,” a reference to the buying enthusiasm associated with increased risk-taking on Wall Street.

As traders awaited the opening price for Snap on Thursday, for example, some wore hats that read “Dow 21,000” after the blue-chip average index broke through that threshold on Wednesday, just over a month after piercing the 20,000 level.

Mounting confidence in the US economy and a sustained recovery in earnings growth in the backdraught of a pro-business agenda from the Trump administration remains the main driver of bullish equity market sentiment, providing fertile ground for an IPO.

“It is easier to IPO when markets are at all-time highs,” said Matthew Kennedy, an analyst at Renaissance Capital, which run IPO-focused exchange traded funds. “Whether its venture capital, private equity, management, etc., all recognise that strong markets help maximise valuations and deal interest.”

Snap’s successful debut also reflects the absence of a big tech IPO since Alibaba, when the Chinese e-commerce giant went public with a record $25 billiondeal in September of 2014.

Against that backdrop, investors were hungry for a growth company like Snap which saw a near seven-fold increase in revenue last year to $405 million.

“There is a scarcity value,” said Vince Rivers, senior fund manager at JO Hambro. “There is pent-up demand in the portfolios with people looking for new ideas.”

Many of the latest, hot tech companies, which also include Uber and Airbnb, have opted to stay private, raising billions in private funding at high valuations and creating a herd of so-called unicorns, or tech companies that have achieved valuations of $1bn or more without going public.

Snap’s performance bodes well for other unicorns to make their way to Wall Street, but so far investors expect this year’s deals will be primarily smaller unicorns and not necessarily the “decacorns” like Snap.

The other key element at play was a fear among investors of missing out on a hot investment opportunity that for all the doubts about Snap’s long term prospects may ultimately emulate the performance of Facebook, Netflix and Amazon.

Multiple investors attending Snap’s roadshow, or marketing campaign, for the deal, were struck by how many people attended, with a lunch at the swanky Mandarin Oriental hotel attracting some 500 prospective buyers.

“People were sitting in that room [the roadshow lunch] saying I think it is too expensive, but I am looking around this room and it [THE IPO]is going to work,” Mr Vince said.

Now as Snap joins the ranks of publicly listed companies, a big test looms with the release of its first quarterly earnings report during the spring.

1 In this strangest of recessions, what happens next for Ireland?
2 Fortnite owner signs multimillion deal to buy Irish ‘kidtech’ firm
3 Former Parmalat officer gets 30-month sentence
4 MacBook Air: Great update, but fans may zoom in on one flaw
5 Will brother’s widow get half of our parents’ estate when they die?
Real news has value SUBSCRIBE