Turnover for 2016 fell 4.9% while subsidiary says effective tax rate for the year was 15% 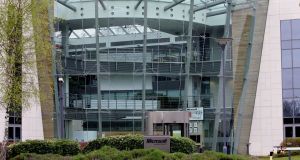 The Microsoft premises: the software giant announced earlier this month that it would add 600 jobs in Dublin. Photograph: Cyril Byrne

Pre-tax profits rose slightly last year at the Dublin-based Microsoft company tasked with marketing, selling and distributing hardware and software to Europe, the Middle East and Africa, despite a decline in turnover.

There was also the $403 million Windows 10 deferral to take into account. The company launched its new operating system in 2015, allowing users of older software, including Windows 7 and Windows 8.1, to upgrade for free for a year.

That was somewhat of a departure for Microsoft, giving existing users the chance to get the software free of charge instead of paying to upgrade as they would have done in the past.

The company was treating the offer as a marketing and promotional activity which meant, it said, “revenue recognition of new sales of Windows 8 will continue to be recognised as delivered”. Because Windows 10 users get updates and upgrades to the software over the lifetime of the device, the revenue is recognised ratably over that period, which is typically between two and four years.

The decline was partially offset by a rise in revenue from devices and gaming.

MIOL said its effective tax rate for the year was 15 per cent, or $168 million, rising above the statutory rate as non tax-deductible expenses rose during the year. Operating profit fell to €984 million, a 0.6 per cent decline.

The subsidiary continued to recruit during the year, with 781 employees at June 20th 2016, compared with 762 a year earlier. Microsoft announced earlier this month that it would add 600 jobs in Dublin with the opening of a new sales centre.

MIOL is one of the software giant’s Irish subsidiaries, with its operations here also including the unlimited company Microsoft Ireland Research, Flat Island Company, which licenses Microsoft software for use in Europe, the Middle East and Africa, and Round Island One.

Microsoft, which has been in Ireland for more than 30 years, is building a new campus to host its Irish workforce on one site. The development will be located in Leopardstown, Dublin and is expected to be completed in the coming months.

1 Admission of mistake in Oxford vaccine dose raises doubts over reliability
2 Cliff Taylor: Deal or no deal we are now heading for a hard Brexit
3 Move to EU or face disruption, City of London is warned
4 Last orders for Rí-Rá and Globe as Central Hotel gets green light to expand
5 Irish Life fund pays €49m for 94 Dalkey apartments
Real news has value SUBSCRIBE