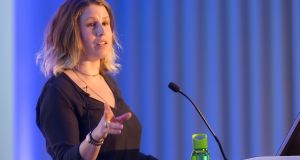 Caroline Criado-Perez speaks at an event in London.

Imagine that your company’s data, the research on which it builds its products and services, was a matter of life or death. In some cases, it might be just that, according to the writer and feminist campaigner Caroline Criado-Perez, who is currently writing a book about the “data gender gap” and how it may impact on women.

The Brazil-born journalist made headlines almost four years ago after she was subjected to systematic and sustained abuse online, particularly on Twitter, over her campaign to get a woman’s face printed on an English banknote. A man and a woman were eventually jailed in January 2014 for their online attacks on her.

Last week she spoke at a major data protection conference in London organised by the International Association of Privacy Professionals (IAPP), leaving many in the room with something to think about, especially in an era when entire business models are built – and thrive or die – based on their use of such data.

Not only did her slides of some of the shockingly abusive tweets sent to her elicit gasps, followed by stunned silence, but the substance of her talk on the uses of data and the quality and reliability of that data will hopefully also have hit home.

The writer instanced multiple cases of bad product design, where women’s needs and even their anatomy simply hadn’t been taken into account at all in research data. She cited one product, since dropped: the laughable example of a pink Bic biro designed especially for women. A to-and-fro between Criado-Perez and the manufacturer failed to get any answers about whether it had disaggregated data on women’s hand size, for example, to justify this stationery abomination.

The best she eventually got from Bic was that the pen was aimed at its “fashion-oriented customers”.

“We thought we’d been using gender-neutral pens; it turned out they’d been ‘men pens’ all along, and we hadn’t realised,” Criado-Perez said.

Separately, in relation to the game Grand Theft Auto, she said the makers failed to include playable female characters in its original iterations because “the characters needed to have narrative arcs”.

“And, as we all know, women are famous for not having narrative arcs,” Criado-Perez commented.

But in other areas she is researching for her book, the quality of data has been shown to have real and varying impacts on the lives of its subjects.

She ran through multiple examples where women have not been taken into account in design or in products, including grab rails on trains that are too high for most women to reach. There was also a “glaring omission” by the designers of Apple’s health-tracking software some years ago, when they failed to include a menstrual tracker.

But, she said, the data gender gap gets much more serious than smartphones and online games “failing to account for basic female anatomy”. For example, badly designed surveys on household income have distorted women’s work patterns and have had an impact on data in developing countries.

“There’s a serious gender data gap actually in medicine as well. Women are almost twice as likely as men to have an adverse reaction to a drug and 80 per cent of drugs withdrawn from the market are due to unacceptable side-effects in women,” says Criado-Perez.

She says this is partly because women are historically, and hugely, under-represented in medical trials, making up about 20-30 per cent of participants.

Her research has taken her into the complex world of pacemakers. Studies show that certain devices work differently on the hearts of women and men, and this has an impact on survival rates. She cited a combination of studies which, she said, showed that women had better rates of survival after receiving a particular implant when the device was calibrated to reflect a female’s electrical heartbeat “circuit”.

Criado-Perez told The Irish Times: “I’m aware that when my book comes out, I’m not going to be very popular. When I gave a talk on women being under-represented in clinical trials and misdiagnosed . . . in a room full of doctors, there were a lot of ‘folded arms and very defensive, unimpressed faces’.”

Her research is ongoing, with completion of the first draft of the book – provisionally titled Atypical – due in the autumn and a spring 2018 publication date pencilled in.

In her final appeal to the data conference last week, she said: “We live in an era of big data and we are meant to be really excited about that, and I would like to share in that excitement. But . . . I know there are huge gaps in our knowledge when it comes to women, which means that any use of big data to design anything, from consumer products to government policy, is hugely problematic and potentially dangerous.”

Reflecting on the Twitter abuse, Criado-Perez believes that, based on existing data from chatrooms, the platform could have been better designed to take into account the differing patterns in how women and men are treated online. She said the abuse she suffered had “100 per cent” changed how she interacted online and had make an impact on what she posts.

“It has made me super-paranoid about everything that I put out there, both in terms of what I choose to say, how I choose to say it, where I store everything,” she said. “I’m constantly terrified that I’m going to be hacked because I’ve had people trying to hack me.

“It makes me really annoyed that the price I have to pay for being a woman who wants to make things better for women as a whole is that I have to worry all the time about people getting hold of my private information.”

1 Basic income for all: Has the Covid crisis given us a new economic model?
2 ‘I don’t need to do any of this. . .I don’t actually need to work.’
3 Promontoria barred from pursuing doctor over Ulster Bank loan
4 Only way is up for Stripe as valuation skyrockets
5 White knights or loan book cannibals – what will happen at Ulster Bank?
Real news has value SUBSCRIBE