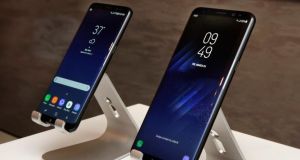 The new Samsung Galaxy S8 and Galaxy S8 Plus smartphones, which come with enlarged “infinity displays” that push the screen out to the edges of the devices. Photograph: AP Photo/Richard Drew

Like a phoenix rising from the flames, Samsung is looking to move on from the debacle that led it to withdraw the fire-prone Galaxy Note 7 last year due to safety reasons.

That phone has been replaced with a new model that Samsung hopes will not only restore the brand’s standing but also help rejuvenate a wider smartphone market that has seen little in the way of real innovation in recent years.

As if proof were needed of this, one need only recall that the biggest fuss at this year’s Mobile World Congress in Barcelona was about the return of the Nokia 3310, a device that was the world’s most popular phone back in 2000.

First, the good news. The new Galaxy S8 and the slightly larger 8 Plus, are good-looking. Both devices are lighter than their predecessors and, in a sign that Samsung has taken a “go big or go home” stance, they come with greatly enlarged “infinity displays” which hide the home button and pushes the screen out to the edges of the devices.

Both the Galaxy S8 and Galaxy S8 Plus will ship with Samsung’s Exynos 8895 chipset in most regions and they come with 4gb of RAM and 64gb of storage. There’s also an upgraded eight-megapixel front-facing camera and a 12-megapixel rear camera. The iris-scanning biometric technology seen in the Note 7 is retained, while the fingerprint scanner has been shifted to the back of the phone.

The devices, which are available to pre-order in Ireland, also comes with more rounded corners, supposedly to give them a better ergonomic feel and help make one-handed use of the device easier.

One new notable feature is a dedicated button for Bixby, Samsung’s answer to Siri. The new artificial-intelligence assistant is designed to let the phone respond more naturally to voice commands. Samsung says Bixby is smart enough to process incomplete commands and also be contextually aware and a demo of it shows it is relatively straightforward to do tasks such as create new photo albums without raising a finger.

“Bixby provides new ways to interact with your phone. Interfaces are often built for search, ecommerce or navigation of operating systems but ours is multi-modal and meant to work across voice, text, vision and so on,” according to a Samsung spokesman at the demo held in London earlier in the week.

The Galaxy S8 and S8 Plus sport fast-charging 3,000mAh and 3,500mAh batteries, and the microUSB has been replaced by USB type C. The devices come in a number of new colours including midnight black, arctic silver and orchid gray.

Among the accessories included with the new S8 is the Desktop Experience Station, or DeX, a dock that the smartphone sits in that essentially allows the device to be used through a monitor as a desktop PC. To coincide with the new devices there is also a radically improved design for the Gear 360, which sees the introduction of true 4K video and 360-degree content capture.

There is plenty to like about the S8 but whether it will be enough to win back consumers frightened away by the Note 7 disaster, which has cost the company more than $5 billion, remains to be seen.

The South Korean company faces increased competition from the likes of Huawei, which have been quick to capitalise on Samsung’s recent misfortune. Its biggest rival remains Apple, which edged out Samsung as the world’s largest smartphone maker in the fourth quarter for the first time in two years.

Apple is preparing to mark the 10th anniversary of the launch of the iPhone with a new device later this year and expectations are that it will be going all out to wow, given the occasion and the fact its recent releases have been underwhelming.

It may be a case of all’s well that ends well for the Note 7, meanwhile with news this week that Samsung looks set to start selling refurbished versions of the smartphones in South Korea this summer. However, in something of a cruel coincidence and hopefully not a bad omen, one of its outlets in Singapore caught fire earlier this week.

Samsung will no doubt be hoping the Galaxy 8 launch will not be seen as the time the company chose to go out in a blaze of glory.