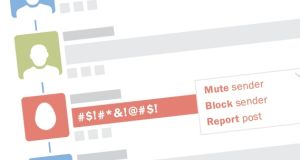 Some 42 per cent of those polled believe the overall negative tone of internet will continue in the next decade, while 39 per cent think situation will worsen

Last year, the Pew Research Center and Elon University’s Imagining the Internet Center carried out a large-scale survey of tech experts, scholars, corporate practitioners and government leaders to gauge their opinions on the future of the internet. The results are in and 42 per cent of them think the next decade will be continue to be “shaped by bad actors, harassment, trolls, and an overall tone of griping, distrust, and disgust” as it is now, while 39 per cent think the situation will worsen.

Conversations with these experts resulted in four major themes, one of which pretty much admitted that trolls have been with us since the dawn of time and have been enabled by the ease and anonymity of the internet, so they’re not going away any time soon. Interestingly, they also felt that incivility is not just hard to counter, it is downright encouraged by publishers looking to drive traffic to their site because “hate, anxiety, and anger drive participation”.

On a more upbeat note, experts predict that AI sentiment analysis and other tools will help in the fight for a civil internet. I, for one, welcome our new troll-crushing AI overlords.