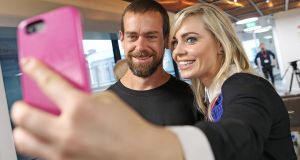 Subscriptions for Twitter, the possibility of an edit button and growing its consumer business were all up for discussion when Twitter chief executive Jack Dorsey visited the company’s Dublin office on Thursday.

It was his second time in Dublin – the first was for the Founders conference a number of years ago – and this time he was there to meet with the Irish team, plus some of the service’s prolific users. Among the invited guests were activists Niall Breslin and Sinead Burke, 2fm presenter Rick O’Shea and illustrator Annie West, who were there to share their stories of what Twitter has meant to them. But there were also questions to answer about the business. Mr Dorsey, who launched payments service Square in the UK earlier this week, has been facing calls to step down amid claims that the number of bot accounts on twitter is around 15 per cent – higher than previously estimated.

But Mr Dorsey seemed upbeat about the future of the service, saying there was still opportunity there for Twitter – and Square – to grow.

“Profitability is a choice. It’s a choice between investment or driving profit. We believe there is massive opportunity to continue to grow and invest in the business,” he said. “To me it’s not a matter of time it’s a matter of focus and making sure we have a good understanding what matters most and trying to prioritise it.”

For Twitter, that will mean hitting on what consumers want to see on the service, whether that is resolving the troll problem – a work in progress, although Twitter has made it a priority in recent months, Mr Dorsey said – or making it easier for users to engage with accounts they follow.

Twitter hasn’t dismissed the idea of a subscription model either, although according to Mr Dorsey, it’s still just an idea for now.

The matter of the edit button, a feature some have requested on Twitter for some time, is still unresolved. Although some users would like the opportunity to correct simple spelling mistakes, others feel the edit button would take something away from the service.

Twitter has been making changes behind the scenes. One of the most significant was the implementation of machine learning to the timeline, turning up more relevant tweets and increasing engagement with users as a result.

“It doesn’t look like we did a lot but we changed everything by changing that one feature,” he said.

Mr Dorsey’s goal is to make Twitter the place where people learn about things first, or go to to find out what is going on. Live events may feature more strongly in the timeline in the coming months as Twitter tries to bring events to users, regardless of where they are, rather than leave them to be discovered.

But regardless, he is optimistic that Twitter will stick around, saying it will “endure”.