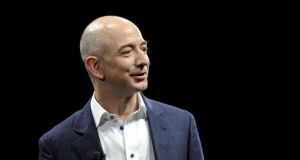 Jeff Bezos: has a net worth of $75.6 billion, $700 million more than Warren Buffett and $1.3 billion above Amancio Ortega (founder of Inditex) and $10.4 billion less than Bill Gates

Jeff Bezos has leapt past Amancio Ortega and Warren Buffett to become the world’s second-richest person.

Bezos (53) added $1.5 billion (€1.39 billion) to his fortune as the share price of Amazon. com rose $18.32 on Wednesday, the day after the e-commerce giant said it plans to buy Dubai-based online retailer Souq. com.

Mr Bezos has a net worth of $75.6 billion on the Bloomberg Billionaires Index, $700 million more than Berkshire Hathaway’s Warren Buffett and $1.3 billion above Amancio Ortega, the founder of Inditex and Europe’s richest person.

Amazon’s founder has added $10.2 billion this year to his wealth and $7 billion since the global equities rally began following the election of Donald Trump as US president in November. He is joined in the top 20 by several other tech titans, including Microsoft’s Bill Gates, Facebook’s Mark Zuckerberg, Oracle’s Larry Ellison and Google’s Larry Page and Sergey Brin,and Jack Ma..

The rise in Bezos’s wealth is the third biggest on the Bloomberg index in 2017, after Chinese parcel-delivery billionaire Wang Wei’s $18.4 billion gain and an $11.4 billion rise for Zuckerberg.

Only two Irish citizens feature on the 500-strong list. They are John Grayken and Denis O’Brien.

The data show that Grayken, the founder of private equity group Lone Star which invests in distressed assets, is ranked 258th with assets of $5.84 billion, up 17 per cent over the past year.

O’Brien, best known for his Caribbean telecoms group Digicel and his Communicorp media empire, is ranked 365th with a current worth of $4.74 billion. That is down 3.6 per cent on his worth a year ago as calculated by Bloomberg, although his fortunes have recovered since the start of 2017 - rising by $415 million over the past three months..

Three woman feature in the top 20. They are L’Oréal heiress Liliane Bettencourt at #14, Alice Walton, one of three sibling heirs to the Wal-Mart fortune in the top 20, and Jacqueline Mars of the family owners of the Mars confectionery group