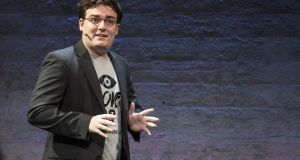 Oculus co-founder Palmer Luckey: Facebook said in a statement that he would “be dearly missed”. Photograph: David Paul Morris/Bloomberg

Palmer Luckey, the 24-year-old founder of Oculus, has left Facebook’s virtual reality unit. The social media company bought Oculus for about $2 billion (€1.87 billion) in 2014. Luckey, who was the face of the virtual reality company, appeared on magazine covers and on lists of young entrepreneurs to watch and had the job of convincing developers to build for Oculus.

Facebook began distancing itself from Mr Luckey after a report that he was financing a group creating anti-Hillary Clinton memes for the internet ahead of the US presidential election. Mr Luckey apologised on Facebook on September 23rd over how his actions may have adversely affected those connected to Oculus and didn’t attend the company’s Oculus Connect conference to avoid being a “distraction”.

In January, Mr Luckey testified in a lawsuit filed against Facebook that accused Oculus of stealing the code for its original product from ZeniMax Media. ZeniMax alleged that Oculus twisted the narrative about its origins by giving Mr Luckey all the credit for inventing it. Facebook lost, with the jury awarding $500 million to ZeniMax.

“Palmer will be dearly missed,” Facebook said in a statement. “Palmer’s legacy extends far beyond Oculus. His inventive spirit helped kickstart the modern VR revolution and helped build an industry. We’re thankful for everything he did for Oculus and VR, and we wish him all the best.”

1 Admission of mistake in Oxford vaccine dose raises doubts over reliability
2 Cliff Taylor: Deal or no deal we are now heading for a hard Brexit
3 Move to EU or face disruption, City of London is warned
4 Fiona Reddan: Who’s afraid of Revolut? Not AIB and BOI it seems
5 Last orders for Rí-Rá and Globe as Central Hotel gets green light to expand
Real news has value SUBSCRIBE