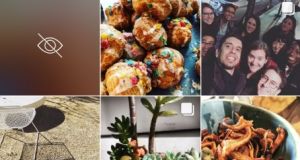 Blurred material: Instagram says it is part of their mission to “safeguard self-expression” and “foster kindness”.

Image-sharing social network Instagram has added new safety and security features for its users. The most noticeable change is the pre-screening of images and videos that may contain sensitive material. Instagram already prohibits the posting of violent, nude, partially nude, discriminatory, unlawful, infringing, hateful, pornographic or sexually suggestive photos. However this is an extra step for images that are allowed but have been reported by other Instagram users as inappropriate and confirmed as such by the Instagram review team. Tapping on the frosted screen will reveal the image.

The company says it is part of their mission to “safeguard self-expression” and “foster kindness”. Chief executive and co-founder Kevin Systrom also announced a new resource, instagram-together.com, which hosts tips and tools to help Instagrammers keep their accounts secure and rid images of unwanted comments or users.

The second new safety feature is two-factor authentication as an extra layer of security, which, when enabled, will require an SMS security code or back-up code in addition to a user name and password when logging on to a new or unknown device.