Amazon being investigated in India for alleged violations of competition law 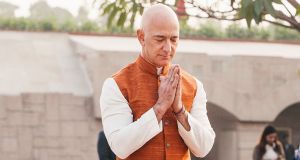 Jeff Bezos has embarked on an Indian charm offensive. Photograph: AFP via Getty

Jeff Bezos began a visit to India with effusive praise and investment pledges, just days after an antitrust watchdog ordered an investigation into Amazon and Walmart-owned Flipkart and their operations in the country.

Mr Bezos announced that Amazon would invest $1 billion (€897 million) to digitise small and medium businesses across India and targeted $10 billion in “Make in India” exports by 2025, in an endorsement of prime minister Narendra Modi’s flagship drive to boost manufacturing.

His charm offensive followed a decision by the Competition Commission of India (CCI), which on Monday said it was investigating Amazon and Flipkart – which was acquired by Walmart for $16 billion in 2018 – in connection with alleged violations of competition law.

Delhi Vyapar Mahasangh, a New Delhi-based traders’ association, filed the complaint against the US retailers over exclusive agreements with mobile phone brands and the alleged preferential treatment of sellers connected to Amazon and Flipkart, claiming that the companies were violating India’s foreign investment rules.

The antitrust watchdog is expected to complete its investigation within 60 days of the January 13 order. The CCI has the power to levy significant penalties on companies. In 2012, it imposed a $1 billion fine on 10 companies accused of running a cement cartel.

Both Flipkart and Amazon, which dominate India’s ecommerce market, denied the allegations. “We are confident in our compliance, and will co-operate fully with the CCI,” said an Amazon spokesperson.

The investigation is the latest regulatory setback for Amazon and Walmart in India, a country home to one of the world’s fastest-growing ecommerce markets as its 1.3 billion people rapidly move online.

Mr Modi’s government was criticised by the US for regulations introduced last year that restricted foreign companies from selling inventory from their own subsidiaries. But Indian trade organisations say the rules are not doing enough to level the online playing field.

Thousands of small business owners joined a nationwide protest on Monday led by the Confederation of All India Traders, a group representing more than 70 million bricks-and-mortar retailers, in protest against Mr Bezos’s trip to India.

“We welcome this probe, now we have to see what they will do, we are sceptical,” said a spokesman for the All India Online Vendors’ Association. “We require concrete action.” – Copyright The Financial Times Limited 2020