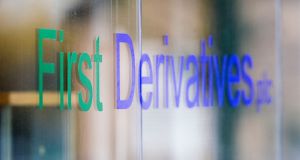 A qualified accountant, Mr Keating was appointed a non-executive director of the company, which provides trading and risk management software systems and consulting services to the capital markets industry, in December 2012 and chairman in July 2013. He previously held several senior roles in the technology sector including as chief financial officer and chief operating officer of IT management consultancy Logica Plc, before its acquisition in 2012.

Following his appointment as chief executive, Mr Keating has stepped down from the board committees of which he was a member.

“We are delighted that Seamus has agreed to lead First Derivatives on the next stage of its journey. He was appointed executive chairman under the most difficult of circumstances and has demonstrated his ability to lead the team effectively while we undertook a search for a new chief executive,” Ms Troy said, adding that there was “considerable interest in the role”.

1 Who are Ireland’s 17 billionaires?
2 My father in a nursing home wants to gift me his house
3 State subsidises public sector retirees to cover gap until State pension
4 Are there annual limits on inheritances or gifts to a child?
5 Pretax profits decline sharply at Tuam-based car tech firm
Real news has value SUBSCRIBE