Pointy sale: How a Google reject built a $160m company and sold it to Google 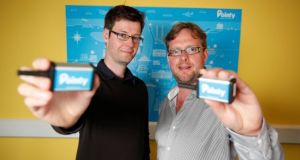 It was after a party at which Mark Cummins (36) was enjoying a craft beer bought from a nearby supermarket where the entrepreneur got the idea for Pointy. He wanted to buy the beer, but couldn’t remember the name of the shop selling it. And that got him thinking that while you can search online for virtually any product around the world, you can’t always find out what’s on the shelf at the shop around the corner.

With that, Cummins set about starting Pointy in 2014 to give small retailers a way to make their stock visible online without having to invest in a full ecommerce system.

A Dublin native, Cummins went to Blackrock College before studying engineering and computer science at Oxford University, where he graduated at the top of his year. He sought a job with Google in 2005 but didn’t get a call back, according to an interview with Business Insider magazine.

That initial failure to break into the working world persuaded him to stay in university to work on a PhD, and it was here he met Charles Bibby.

This was a time of substantial technological change, with the first iteration of the iPhone in the works. With a fellow Oxford student, Cummins came up with the idea of Plink, an app in which users could photograph something for the app to identify. Four years later, the app would come to the attention of Google, winning a $100,000 (€90,000) prize from the company.

One year later, Google acquired Plink, its first acquisition in Ireland or Britain. While the price for the sale of that company was never disclosed, Cummins described it at the time as a “life-changing sum”.

With Google’s acquisition, Cummins started to work full time with the tech giant, fulfilling his ambition of five years previously. The technology that Plink used ended up being used across a number of Google applications, but the consumer app as a standalone is no more.

“A condition of Google’s purchase of the company, was that we had to move to LA and work for Google in LA. I then spent a while in Google’s Sydney office before quitting the company and deciding to return home to Ireland to think about start-up ideas,” Cummins told The Irish Times in 2015.

After three years with Google, Cummins left in 2013 to establish Pointy. Knowing that the friend with whom he established Plink, James Philbin, was unavailable, Cummins called Charles Bibby, who at that time was in the middle of an 18-month trip around the Mediterranean. While Cummins thought the chances of him coming on board were slim, he gave him a call to get his advice.

So intrigued was Bibby that he sent his equipment to Ibiza and made the first version of the Pointy box on a chart table in his boat, Cummins told the Journal.ie in 2017.

For Bibby, this was perfect timing because he had been trying to think of a start-up idea himself.

Before his sailing trip, Bibby had completed his PhD in robotics at Oxford and went on to design security systems for the London 2012 Olympics, but he was ready for change.

“I cleared off on what was going to be an 18-month sailing trip around the Mediterranean. I proposed to my girlfriend on the day I left for the trip. I got to Ibiza when Mark called. I sailed back across the Bay of Biscay in October. I struggled to even get insurance to do that as the weather is unpredictable at that time of year,” Bibby told The Irish Times in 2015.

Less than 12 months after the voyage, the start-up made its home in Dublin and secured funding of €1.12 million from high-profile investors including Wordpress founder Matt Mullenweg, Bebo’s Michael Birch and Google Maps co-founder Lars Rasmussen. Prior to that it had won investment of €100,000 from AIB and Frontline Ventures.

Its sale to Google, Cummins’ second, will deliver a reported $80 million-plus payday for the company’s founders (based on a $160 million valuation) – a second “life changing sum” for Cummins from Google.

Cummins will receive a $42 million payout while Bibby and his wife Helena Bibby will get $39.7 million. Google could have saved itself a lot of money had Cummins got the job he applied for in 2005.