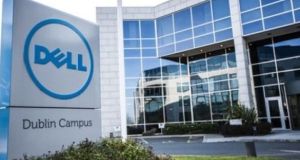 Pretax profits almost doubled at Dell Products in the year to February 2019, jumping from $12.75 million to $23.95 million

One of Dell’s key Irish subsidiaries paid $712 million (€639 million) in dividends to its Dutch parent entity last year, new accounts show. Over the same period, the company received a capital contribution of $557.7 million from the parent.

Dell Products, which sells and distributes the group’s products in Europe, the Middle East and Asia (EMEA), employs close to 2,000 people locally, with headcount having doubled last year after it took ownership of another Irish unit known as Dell Direct a year earlier.

A breakdown of turnover shows hardware revenues totalled $12.6 billion while software-related sales came to $318.9 million. The company also reported revenues of $790.8 million for professional services and $9.1 million for service fees.

The latest accounts show that Dell Products received a capital contribution of $557.7 million from its parent last year via a transfer of shares in another group subsidiary, Dell GmBH.

Employee costs more than doubled last year on the back of increased staff numbers to $218.9 million.

The technology giant’s Irish subsidiaries have increasingly focused on paying out dividends to its parent in recent years. Dell Direct, the computer giant’s Cherrywood-based sales and support operations unit prior to its €15.9 million acquisition by is sister company, paid out €172 million to Dell International Holdings in 2017, its last full year of trading.

Dell, which acquired data storage systems specialist EMC in a $67 billion deal in 2015, employs about 5,000 people in total in the Republic.

Recently filed accounts show Co Cork-headquartered EMC Information Systems reported a $1 billion increase in turnover to $5.2 billion in the year to the end of February. The company subsequently paid a $135 million dividend to its immediate parent.

1 Opioid executive admits to ‘no morals’ ahead of prison term
2 Does Budget 2020 price UK car imports out of the market?
3 American YouTubers embrace the crisp sandwich
4 South Dublin Credit Union members urged to borrow more to ensure survival
5 ‘If you don’t like challenges, you should not be in the airline business’
Real news has value SUBSCRIBE