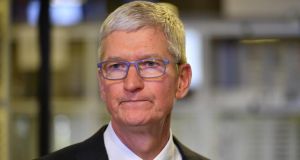 Apple chief executive Tim Cook is to be presented with an award by Taoiseach Leo Varadkar in Dublin later this month.

Mr Cook will receive the award on January 20th, in recognition of the company’s 40 years of investment in the Republic, IDA Ireland said.

While Apple is one of the State’s biggest employers, some tensions have emerged. In 2018, the company shelved a plan to build $1 billion (€900,770) data centre in Athenry in the face of ongoing planning objections.

In addition, the European Union has slapped Apple with a multibillion euro bill, saying the State granted the company unfair deals that reduced its corporate tax rate. Apple and the Government are both appealing that decision. – Bloomberg