Web Log: Smart Notebook focuses on group projects with a minimum of fuss 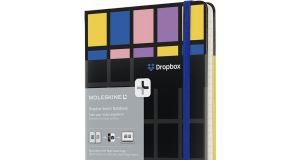 For students who prefer to take handwritten notes in class or professionals who want to think on paper without the distraction of the internet, the Dropbox notebook is a good choice.

Moleskine’s new Dropbox Smart Notebook is not the first tech collaboration for this iconic brand. It first partnered with Evernote in 2012 to create a notebook that used Evernote’s Page Camera feature to snap pics of your Moleskine writing and sync it automatically with the app.

The new Dropbox notebook is a similar undertaking but with a focus on group projects. The idea is that scribbles and sketches on paper can be added to Dropbox with minimum fuss and, once digitally stored, shared, accessed and annotated from any linked device.

For students who prefer to take handwritten notes in class or professionals who want to think on paper without the distraction of the internet, the Dropbox notebook is a good choice. It works via the Moleskine Page Camera App (which also works with all Smart Notebooks). Once the app captures all four markers that frame each page of the notebook, it optimises by converting drawings into .svg format and text into .text or .jpeg while allowing for the addition of metadata including keywords.