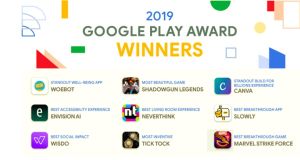 At this week’s I/O event, the annual Google Play Awards shone the spotlight on outstanding Android apps over the past year. Top of the list was the Standout Well-Being App, awarded to Woebot, a self-care chatbot created by Stanford psychologist – and University College Dublin PhD graduate – Dr Alison Darcy.

Following on the theme of mental health and well-being, Wisdo took the award for Best Social Impact. This alternative social media app connects like-minded individuals and hosts groups on everything from mindfulness and going green to LGBTQ+, motherhood and PTSD.

Gaming was also a focus with Marvel Strike Force scooping Best Breakthrough Game while Shadowgun Legends was awarded Most Beautiful Game. Tick Tock: A Tale for Two already has numerous awards to its name and added Most Inventive app to the list. This interactive puzzle game is a two-player where you and a friend are trapped in a mystical clockwork world from which you must escape by solving perplexing puzzles.

1 My aunt never told us that Gran passed away with no will
2 Ryanair to slash 1,000 flights from August and September schedules
3 If it’s safe to do so, could this be the time to spend for Ireland?
4 Green Party TD queries ‘usefulness’ of another appeal in €13bn Apple tax case
5 The $6bn judgment pitting Nigeria against Irish businessmen
Real news has value SUBSCRIBE