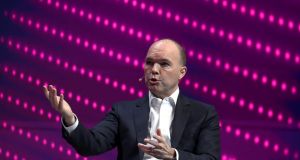 Vodafone Ireland has said service revenues grew 1.3 per cent in the 12 months to the end of March as its parent slashed its full-year dividend by 40 per cent.

The Irish unit said growth was largely fuelled by a rise in contract mobile customers, which rose by 8,000.

Overall, mobile customer growth was little changed however, rising just 0.1 per cent over the year.

The company said the number of customers using its 4G network rose with over 1.1 million devices now 4G enabled. It reported a 26 per cent rise in new 4G enabled plans over the 12 months under review.

Vodafone Ireland’s fixed broadband customer base was up 266,000 in the fourth quarter, up 0.2 per cent on a year-on-year basis.

The company, which recently confirmed plans for a commercial launch of 5G later this year, extended its trial network site site in Dublin’s docklands. It also became the company became the first Irish network to provide 4G calling (VoLTE) to its customers.

VoLTE (voice over long-term evolution) is a standard that allows mobile users to make phone calls over 4G rather than on traditional cellular voice networks.

A sister service, VoWiFi (voice over wifi), has also been made available which helps eliminate mobile blackspots for users by making it possible to make and receive calls over wifi.

The update comes as Vodafone Group on Tuesday slashed its full-year dividend by 40 per cent to 9 cent per share, reversing chief executive Nick Read’s pledge to keep the payout unchanged.

Vodafone’s organic service revenue fell 0.6 per cent in the fourth quarter from a year earlier, versus the 0.7 per cent drop forecast by analysts in a company-compiled consensus, as sales declines worsened in Italy and Spain.

Mr Read said Vodafone was at a “key point of transformation” as it accelerates a digital overhaul, simplifies operations, generates better returns from its infrastructure and continues to “optimise our portfolio”.

Mr Read has reset Vodafone’s strategy since taking charge in October. He’s accelerated cost cuts, put assets on the block and wants to share the burden of maintaining and developing networks with other carriers. Vodafone moved to free up some cash late Monday with a NZ$3.4-billion (€1.99 billion) deal to sell its New Zealand business to a consortium including Infratil and Brookfield Asset Management.

With the savings from some of those measures taking time to appear, analysts were pencilling in a likely dividend cut to avert credit rating downgrades that would have pushed Vodafone debt closer to junk territory.

That would cast a cloud over the €18.4 billion purchase of Liberty Global Plc assets in central and eastern Europe.