Dublin-based Ion buys former Mergermarket in deal worth over £1bn

Acuris is a financial information services that claims 115,000 daily users 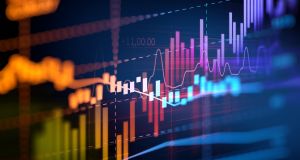 The deal was reportedly worth €1.56 billion. Photograph: Getty Images/iStockphoto

The group, which was formerly known as Mergermarket, was acquired by equity firm BC Partners for a reported £382 million (€440 million) from Pearson in late 2013.

BC Partners is to retain a minority stake of 25 per cent in Acuris as part of the transaction.

No financial details of the deal were disclosed but the Financial Times reported it was worth £1.35 billion (€1.56 billion).

Ion, which is backed by private equity group Carlyle, has become one of Europe’s largest software companies, supplying data analytics and trading and risk software to the world’s financial markets.

Founded in 1999 by former bond trader Andrea Pignataro, the company has been involved in a number of big acquisitions in recent years, including the £1.5 billion (€1.73 billion) acquisition of rival Fidessa in April 2018.

Other deals include a majority stake in Dealogic, and the full acquisition of Patsystems, FFastfill, Rolfe and Nolan and Wall St Systems.