CES preview: Devices that will invade your life in 2019

AI that responds to your voice, next-generation wireless networks and more are on display at the consumer electronics trade show in Las Vegas 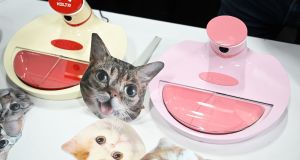 Imagine a future where you are never truly alone. Even when your spouse is on a business trip or your children are away at summer camp, you will always have someone (or something) to talk to. In the morning, you could ask the microwave to heat up a bowl of oatmeal. In your car, you could tell your stereo to put on some ‘90s music. And when you walk into the office, you could ask your smartphone, “What’s on my calendar today?”

This is increasingly the world that the tech industry is building with a bloating portfolio of devices that can react to voice commands – and that the companies will be pitching to you even more in 2019. The future will be on display this week at CES, the consumer electronics trade show in Las Vegas that serves as a window into the year’s hottest tech trends.

Artificially intelligent virtual assistants will take centre stage as the most important tech topic, with companies big and small expected to showcase voice-controlled devices like robot vacuums, alarm clocks, refrigerators and car accessories. Most of these products will be powered by Amazon’s Alexa or Google’s Assistant, the two most popular artificially intelligent assistants, industry insiders said.

“AI will pervade the show,” said Gary Shapiro, chief executive of the Consumer Technology Association, which owns CES. If this all sounds like a repeat of last year, that’s because much of it is. AI was 2018’s hottest tech trend, too. In other words, the tech industry is in a state of iteration rather than making leaps and bounds with something totally new. Other tech trends that are progressing include the debut this year of fifth-generation cellular networks, known as 5G, which will significantly quicken mobile internet speeds. Cybersecurity products for home networks are also proliferating, an important safeguard now that consumers own so many devices that can connect to the internet.

But as is often the case, there will also be plenty of talk in the coming week about overly optimistic tech that you would do best to sidestep for now. That’s because some of the most hyped technologies – especially self-driving cars – are so far from reality that you won’t see them in stores or dealerships anytime soon.

Here’s what to watch and what to avoid.

– Battle of the virtual assistants: In 2015, Amazon birthed the Echo, the artificially intelligent speaker featuring the virtual assistant known as Alexa. A year later, Google responded with Home, its smart speaker powered by Google’s own digital companion, called Assistant. Since then, in a bid to become your go-to digital companion, the two tech giants have teamed up with makers of devices like thermostats, doorbells, light bulbs and car accessories to add their virtual assistants to them. Google is expected to be even more aggressive this year with its Assistant. The company will triple the size of its presence at CES this year, suggesting it is likely to unveil a large array of products that work with Assistant. “We’re really leaning into the Assistant as the best way to get things done, helping you for lots of things as you go about your day,” said Nick Fox, a Google executive who oversees Assistant. Amazon said it would also showcase a wide range of technologies this week that work with Alexa, as part of a vision it calls Alexa Everywhere. The company’s goal is to expand the reach of its virtual assistant into every part of people’s lives, including the kitchen, the living room, the office and the car.

For you and me, here’s a cautionary note: virtual assistants are still in their infancy and have many shortcomings. We have to speak a very specific command to trigger a virtual assistant to control a device, like setting the temperature on a thermostat or turning on a lamp. Those unfamiliar with the lingo may find the devices even more difficult to use than pressing a button inside an app.

“We still have to learn their language, and they have not learned our language,” said Frank Gillett, a tech analyst for Forrester, a technology research company.

Lost in the hype about virtual assistants is whether people truly want an omnipresent companion involved in their everyday tasks. Owners of smart speakers mostly summoned digital assistants for basic functions like listening to music, checking the weather and setting a timer, according to research by Nielsen last year.

– Security for your smart things: Plenty of people install antivirus software on their computers. But what about all the other devices that can be connected to the internet, like smart watches, phones, televisions and speakers? In an era of smart things, the wifi router is becoming a bigger target for hackers, so expect a flood of new equipment and software that offer protection by improving your network security. For a sense of what to expect, consider Eero Plus, a subscription service that Eero, a maker of wifi equipment, released last year. Eero Plus includes protection against viruses and malware for all the devices connected to its wifi network. Last year, NetGear released NetGear Armor, a similar security service.

More should follow this year – beginning this week at CES, where Scalys, a networking company, plans to introduce TrustBox, a router with built-in security features.

– The arrival of 5G: This year, the wireless industry will begin a big upgrade to its infrastructure. Phone carriers like AT&T and Verizon Wireless say the 5G technology will deliver data at incredibly fast speeds, allowing people to download entire movies in a few seconds.

In addition to increasing smartphone speeds, 5G will be important for other types of devices, like robots, self-driving cars, drones and security cameras. The technology is expected to greatly reduce latency, or the time it takes for devices to communicate with one another.

But don’t get too excited. Carriers say the new network technology will be deployed this year in only a few cities in the United States, and in some parts of Britain, Germany, Switzerland, China, South Korea and Australia.

And not many smartphones will be compatible with 5G initially. Some Chinese handset makers and Samsung Electronics have said they will release their first 5G smartphones this year. Apple is not expected to release a 5G-compatible iPhone until 2020.

“For the early adopters with deep pockets, that’s great,” Gillett said. “For the rest of us, big whoop.”

Here’s what is still overhyped. Virtual reality and self-driving cars have been talked about a lot in recent years, and they will still be talked about this year. But these two technologies are still nascent or premature.

Over the past two years, tech companies like Facebook’s Oculus, HTC, Google and Samsung have flooded the marketed with VR headsets and plenty of software and games. Yet people have not exactly embraced the products.

“The industry has been plagued by high-cost hardware, motion sickness, a dearth of compelling content and a general lack of consumer interest,” said Victoria Petrock, an analyst for the research firm eMarketer, in a recent post. Self-driving cars are also still many years from becoming mainstream.

Even though some companies have permits to test autonomous cars in California, Arizona and elsewhere, several of the leaders in the technology – such as Alphabet’s Waymo – have refrained from committing to a release date for self-driving vehicles.

“There’s going to be a lot of noise about automotive technology but nothing distinct or specific,” Gillett said. – New York Times