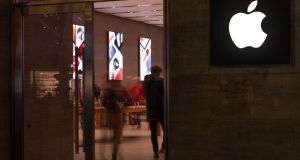 Apple issued an extremely rare revenue warning late on Wednesday, blaming economic weakness in China and disappointing iPhone upgrades in the developed world for a shortfall of as much as 10 per cent from its previous expectations.

The news wiped more than 7 per cent from the company’s shares in after-market trading.

Revenue for the final three months of 2018, the most important period of its fiscal year, was likely to come in at approximately $84 billion (€74 billion), it said. Two months ago, it predicted that it would report revenue of between $89-93 billion for the period.

“While we anticipated some challenges in key emerging markets, we did not foresee the magnitude of the economic deceleration, particularly in Greater China,” Apple said.

It also pointed to weaker-than-expected demand for the iPhone in developed countries, with fewer people than expected upgrading to new handsets. It blamed this shortfall on weaker economies, a decline in subsidies offered by mobile carriers, and its own recent subsidised battery replacement offer, which had led more people to hold on to their existing phones. – Copyright The Financial Times Limited 2019

1 Son putting elderly dad under pressure to sign over land
2 Family in court dispute over hotels in Dublin and Galway
3 BOI customers to be charged twice with bank fees on New Year’s Eve
4 How to gift your child a house deposit . . . tax free
5 Running to go backwards: The problem with productivity apps
Real news has value SUBSCRIBE