Apple sales warning: Have we fallen out of love with new iPhones? 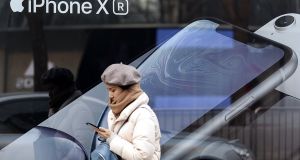 Smartphones “are not as sexy as they used to be”, says one analyst. Photograph: Bloomberg

A sudden dip in sales in China may be the biggest factor behind Apple’s drastic revenue shortfall, but the deeper issues the warning has raised about the iPhone will turn out to have a more lasting impact on the company.

That was the verdict of many Apple-watchers after the US personal tech giant issued a rare – and shocking – revenue warning. The company said sales in the latest quarter would fall as much as 10 per cent below a forecast it issued only two months ago.

Signs of softening demand for the latest iPhones, even outside China, have been emerging since Apple issued a weaker than expected forecast at the beginning of November.

Several component suppliers warned of a large smartphone customer cutting orders. Apple gave an unusually prominent promotional push on its homepage to its trade-in programme, in the hopes of enticing existing iPhone owners to get a discount on the latest model by handing back their existing device. Its decision to stop revealing iPhone unit sales figures was also seen as a red flag.

Yet until recently Apple sought to counter the growing scepticism about iPhone sales, suggesting it did not anticipate the depth of the problem. Just a month ago, Greg Joswiak, vice-president of product marketing, gave an interview to tech news site CNET insisting that the new XR model had been “our most popular iPhone each and every day since the day it became available”.

Tim Cook, Apple’s chief executive, placed the blame for the reversal on economic conditions in China, as well as a number of issues that he said led to fewer people than expected upgrading to newer models of the iPhone in the developed world.

However, some of Mr Cook’s explanations – including the end of carrier handset subsidies in the US and a cut-price battery replacement offer that had led more people than expected to hang on to their current phones – were hardly new, and were brushed off by many analysts as distractions from deeper issues the company is facing.

“I don’t think that rings true. All that stuff has been going on for a year,” said Gene Munster, analyst at Loup Ventures.

He and others pointed to more pressing issues that appeared to reveal a turning point in the iPhone’s fortunes, and suggested that sales would not bounce back quickly.

Many analysts pointed to the price increases pushed through last autumn as the main reason for the sales disappointment. The weighted average price of Apple’s handsets was up 23 per cent, according to Mr Munster, as the company switched from its old practice of selling older models at lower prices to introducing a new range of models.

Apple’s strategy of counteracting slower growth in the smartphone market by raising prices has worked until now. But while customers felt that the iPhone X provided a technical leap forward that matched its premium pricing, it was unable to repeat such a big jump in performance with the latest iPhone XS and XR models.

“China, etc, are valid reasons, but we can’t ignore that, across the entire product line, there’s been a very common theme for the last few years of paying more and getting less,” said Marco Arment, the vocal iPhone app developer behind podcast player Overcast, in a tweet. “When you keep tightening the screws on your customers, you’ll eventually find their breaking point.”

The latest price rises also came as a slowing economy in China and elsewhere ate into consumer sentiment. “In hindsight, it was the wrong thing to do, though it made perfect sense at the time,” said Mr Munster.

While the price increases may have made the situation worse, some analysts said that the revenue downturn showed that the iPhone was losing its allure.

“People are saying, I’m happy with the features I have,” said Carolina Milanesi, an analyst at Creative Strategies. The iPhone news is “a bigger problem” for Apple than the slowdown in China, she added, because “it shows the replacement cycle, driven by new features, is not as strong as it was”. Smartphones “are not as sexy as they used to be”, Ms Milanesi said.

She estimated that the average iPhone user now upgrades to a new model every 30-36 months, compared to about 24 months in the past.

In his letter to investors on Wednesday, Mr Cook said Apple was working on new ways to encourage iPhone users to upgrade, for instance by making it easier to transfer their data to a new handset and providing financing for the devices.

Financing offers and other incentives such as these are likely to become much more common this year as the smartphone industry tries to prompt customers to buy a new generation of 5G handsets, said Geoff Blaber, an analyst at CCS Insight.

Meanwhile, the revenue problems are set to bring intense scrutiny of Apple’s fortunes in China. While it blamed macroeconomic conditions there for its shortfall, it did not mention the pressure it is feeling from rival smartphone makers in the world’s biggest mobile market.

According to Counterpoint Research, Apple’s share of the Chinese smartphone market fell below 10 per cent in the second and third quarters of 2018, while shares of local competitors Huawei, Vivo and Oppo all climbed above 20 per cent at the same time - largely thanks to cheaper devices.

Huawei, despite national security concerns keeping it largely locked out of the US mobile market, last summer overtook Apple to become the world’s second-largest smartphone maker, behind Samsung.

This is not the first time changing fortunes in China have weighed on Apple’s performance. Sales sagged during 2016 after the huge growth spurt brought by the larger-screened iPhone 6 and carrier support from China Mobile in the year earlier. Apple’s return to revenue growth in Greater China from mid-2017 onwards has played a crucial role in its broader recovery – until now. –Copyright The Financial Times Limited 2019