Google ramps up the ‘double Irish’ before closing time 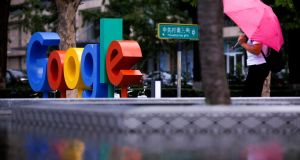 Google’s standard defence when challenged about tax manoeuvres is to say it pays all of the tax legally required of it in the countries in which it operates. Photograph: Thomas Peter/Reuters

Like revellers ordering a clutch of pints before closing time, Google and the other large companies that form part of the global tech vanguard are squeezing every last drop out of the “double Irish, Dutch sandwich” tax-avoidance trick before the loophole is finally closed by the State next year.

In figures reported this week by Reuters, Google shifted €19.9 billion in 2017 through a Dutch shell company and on to the tax haven of Bermuda, according to documents filed a few days before Christmas with the Dutch chamber of commerce.

As the Republic is the linchpin of its international operations, it is fair to assume that most the cash shifted to Bermuda emanated from Google’s operations here. The sum shifted in 2017 was about €4 billion more than the prior year. Can I have a chaser with those pints before you pull down the shutters, please?

Google’s standard defence when challenged about these manoeuvres is always to say that it pays all of the tax legally required of it in the countries in which it operates. The problem is not us, it pleads, it’s the law.

This is, of course, correct. It is up to legislators to act competently to make sure that loopholes are closed, and to also eschew the “advice” of the global tax advisory firms whose meddling helped produce the loopholes in the first place.

If Google can legally reduce its tax bill by exploiting loopholes in international tax rules, then its directors would be selling its shareholders short if they didn’t at least examine the option . . .

. . . As long as Google and its tech peers are prepared to accept the reputational mudslide that inevitably come with (legally) helping to hollow out the tax bases of the states in which they operate. What else does it expect?