Brewbot founder to run IgniteNI accelerator programme in the North 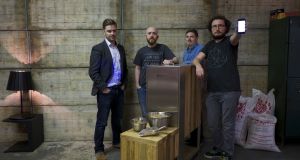 One of Northern Ireland’s best-known tech entrepreneurs, Chris McClelland, has been appointed to run the IgniteNI accelerator programme for start-ups in Belfast.

Prior to this, Mr McClelland was chief executive of Belfast-based mobile software company Ecliptic Labs, and an adviser and non-executive director of Performa Sports, a Craigavon-headquartered company that has developed a real-time sports performance analysis application for analysts, coaches, and players.

Brewbot, which developed a custom-built brewing machine or “robot” that could be controlled with a smartphone, was recently in the headlines after it got into trading difficulties and ceased trading and development last September owning creditors £1.8 million (€2 million).

Mr McClelland said the company, which also operated a bar over which it had its headquarters in Belfast, experienced problems when agreed funding ended up being delayed. He said he had recently been focused on “making things right” in terms of Brewbot, as well as considering what he would do next.

A former “entrepreneur-in-residence” on the IgniteNI programme, he said he hoped his experience in business – both positive and negative – would be of help to fledgling companies looking to make the big time.

“I’m still 100 per cent an entrepreneur and expect to be back with something at some stage. However, I felt that it would be a waste not to do something given the learning I gained from Brewbot,” said Mr McClelland.

“Most successful CEOs have experienced failure and probably all of them would say that it was a key step to finding success and this is something we could all do with remembering,” he added.

The 24-week IgniteNI pre-accelerator programme Propel begins on Monday next with 20 start-ups working across everything from esports to cybersecurity, energy and fashion. The next full accelerator commences in March.

Among last year’s cohort was CadShare, a distributed platform for manufacturing parts that raised £500,000 in funding even before completing the programme.