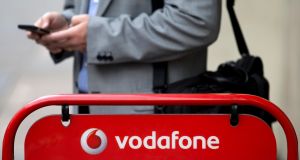 Accounts filed recently for Vodafone Retail Ireland recorded the drop in sales to €74.6 million in the year to the end of last March. Photograph: Justin Tallis/AFP/Getty Images

Vodafone has blamed lower demand for new mobile handsets for a 9 per cent drop in revenues at its retail network.

Accounts filed recently for Vodafone Retail Ireland, which captures the performance of the group’s own-brand store network, recorded the drop in sales to €74.6 million in the year to the end of last March.

Operating profits at the estimated 100-strong Vodafone store network also fell, by two-thirds to about €520,000. Average staff numbers employed at the stores fell by 15 to 198 during the year, while the retail network also shaved 6 per cent of its wage bill to €6.8 million.

The wider Vodafone Ireland group, however, returned to profitability over the year on sales of €966 million, according to group accounts reported last month in The Irish Times.

“Each of the other mobile networks operating in Ireland continues to develop their retail presence, while there is also competition from a number of other independent retailers,” the retail network’s directors said in commentary attached to its financial statements.

“[The] decrease in revenue [is] due principally to a reduction in the volume of handsets sold.”

As smartphones become ubiquitous and devices more advanced, increasing handset longevity is beginning to have an impact on how often consumers are prepared to pay for new phones.

Manufacturers such as Apple, which this week announced a shock fall in handset sales in China, have been particularly badly affected.

The group accounts show Vodafone added 51,000 post-pay (contract) mobile customers over the year to the end of March 2018, up almost 5 per cent, while another 5,100 signed up for fixed-line services. The group said it had a total mobile phone customer base of 1.95 million.