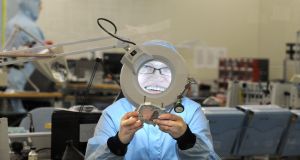 A worker at the Andor Technology factory. Photograph: Charles McQuillan/Pacemaker

Belfast-based digital camera manufacturer Andor Technology reported a 24 per cent drop in profits last year as it again warned of possible risks to the business due to Brexit.

The company, which spun out from the physics department of Queen’s University Belfast, was acquired by London-listed tech company Oxford Instruments for £176 million (€195 million) in December 2013.

Newly filed accounts for the west Belfast-based company show pretax profits fell from a record £12.7 million to £9.6 million in the 12 months to the end of March 2018. Turnover was also down, falling from £69.2 million to £63.6 million over the same period.

The company said its gross margins increased from 53.1 per cent to 53.7 per cent due to a “more favourable sales mix in the year, and the impact of foreign exchange movements”.

Andor said research and development activities declined 8.6 per cent, from £5.8 million to £5.5 million.

The company received a £1.8 million dividend, down from £4.8 million a year earlier.

Andor said it had cash balances of £28.4 million at year-end, up from £15.9 million in the previous year.

The company, which was set up Hugh Cormican, Donal Denvir and Mike Pringle in the late 1980s, warned of possible lower sales and profitability in the year ahead due to Brexit. It also raised concern about supply-chain disruption and lower net pricing on exports to the European Union.