Bitcoin gets bittier as ideological battle leads to split 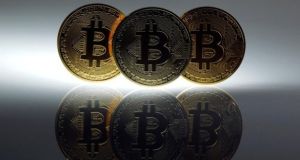 Bitcoin: breaking up is hard to do

It has been an eventful week in the world of bitcoin, the digital currency built on blockchain technology that is forever being touted as the next big thing.

Bitcoin cash, a new alternative that came into being on Tuesday, quickly climbed in value to trade above $750 to become the world’s third most valuable cryptocurrency, grabbing a 17 per cent market share as its worth jumped to $7.6 billion. The market is led by the original Bitcoin and then another rival, etherum. Still, not bad for a newbie.

But as tends to happen in the crazy world of virtual currencies, the price dropped as quickly as it rose, falling by more than 50 per cent to trade under $288 at one point on Friday.

For those not keeping up with the ever-changing world of cryptocurrencies (and let’s face it, that is most of us), the latest saga may be somewhat confusing. Put simply, bitcoin separated into two currencies following a long-running ideological battle over what rules should guide its network in the future.

The split gave way to bitcoin cash after the original bitcoin’s “forked” in a move that created a duplicate cryptocurrency that shares the same basic architecture but with a number of technical differences, including increased blockchain capacity.

Something similar has happened before. Last year, another major cryptocurrency etherum forked. However, bitcoin’s split is seen as more critical, not least because a number of leading exchanges including Coinbase have been a bit sniffy about the new offshoot.

While Coinbase has since rolled in behind the new digital currency, some experts believe bitcoin cash’s value could deteriorate further.

Which version of the cryptocurrency will reign supreme remains to be seen but one thing is for sure, the battle could get brutal.