Cantillon: ECB and Central Bank will limit bank’s payouts as it wades through bad loans 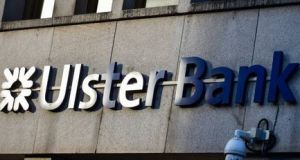 Only the most optimistic would believe that Ulster Bank will ever be able to repay all of a £15 billion (€16.6bn) bailout received from its parent, Royal Bank of Scotland (RBS), during the financial crisis.

But it would appear there is plenty of money in the tank in the Irish operation to repatriate to Edinburgh, even after Ulster Bank paid an initial €1.5 billion dividend late last year out of surplus capital on its books.

Ulster Bank chief executive Gerry Mallon told The Irish Times on Friday “it’s certainly our aspiration” to pay more over to RBS, and that it remains in talk with regulators on the matter.

As of the end of June, the lender had a common equity Tier 1 (CET1) capital ratio, a measure of financial strength, of 30.5 per cent of risk-weighted assets – the highest among retail banks in Dublin by some stretch. It equates to about €6.25 billion, by Cantillon’s estimates.

If Ulster Bank were to reduce its CET1 ratio to the wider RBS target of 13 per cent it would free up €3.59 billion. However, releasing anything near all of that back to the group is unlikely.

Firstly, Ulster Bank would need an additional capital cushion to underpin its growth plans. With a net loan book of just €22.2 billion, it has its work cut out rebuilding itself to become a meaningful challenger to the likes of Bank of Ireland and AIB, whose loan portfolios stood at €76.9 billion and €63.9 billion at the end of June, respectively. (The two pillar banks are also a shadow of their former selves after years of loan book contraction.)

Secondly, supervisors in the European Central bank and Central Bank of Ireland will limit payouts by Ulster Bank as it continues to wade through bad loans. After selling billions of euro of commercial property loans in recent years, the bank continues to have €4 billion of under-performing loans – or 17 per cent of its total portfolio.

Up until now Ulster Bank has relied “much more on temporary forbearance solutions” for troubled mortgage holders, according to Mallon. “It’s really only now that we’re getting stuck into restructuring on a more sustainable basis.”

Ten years after the crisis began, no rush then.