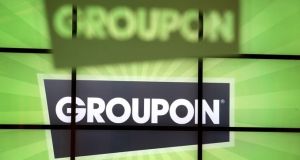 Recently-filed accounts for Groupon-Citydeal (Ireland) Limited show turnover fell by more than 31 per cent to €2.89 million from €4.2 million in the 12 months to the end of December 2016.

The unit recorded a €1.36 million pretax profit for the year as against a €1.58 million profit a year earlier. The decline in profits came despite a steep fall in administrative expenses, cost of sales and staff costs.

A second Dublin-based operation, Groupon International Limited, filed accounts late last year that show it slipped into the red in 2015.

The division, which employs more than 100 people in Ireland, recorded a €5.7 million pretax loss in the 12 months under review, compared to a €9.9 million profit in 2014.

Chicago-headquartered Groupon launched in November 2008. Within three years it had gained more than 60 million subscribers and achieved $760 million (€653m) in annual revenues.

It operated in 42 countries, and had turned down a $6 billion (€5.1bn) acquisition bid from Google.

However, the company has experienced significant trading difficulties in recent years, with its stock falling by as much as 70 per cent at one point in 2015.

Groupon’s share price has since rebounded, although Bank of America last week said the stock should be trading at a discount as it has “limited” top-line growth.

Groupon acquired LivingSocial, which was once valued at between $4 billion and $6 billion, last October for a price low enough to be considered “not material”.