CEOs from Google, Facebook, Amazon and Apple faced jabs for alleged abuse of their market power from Democrats and Republicans on Wednesday in a much-anticipated congressional hearing. 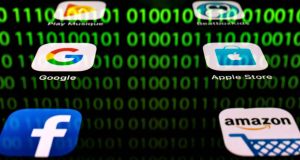 Amazon, Google’s parent company Alphabet, Apple and Facebook all posted eye-watering earnings figures for the April-June quarter, a day after the bosses of Big Tech faced scrutiny in Washington for their methods of chasing market dominance.

Amazon was the standout performer, posting the biggest profit in its 26-year history as online sales and its lucrative business supporting third-party merchants surged during the coronavirus pandemic.

Although Alphabet recorded the first decline in its revenue in at least a decade, all four companies exceeded analysts’ estimates of their revenue and earnings per share for the quarter, sending their share prices up in after-hours trading on Wall Street.

Amazon handsomely profited from a global escalation in ecommerce following social restrictions introduced by governments worldwide to curb the spread of coronavirus. Its net sales rose to $88.9 billion in the second quarter, up 40 per cent on the same period in 2019. This easily beat analysts’ estimates, while its earnings per share of $10.30 was far ahead of forecasts.

“This was another highly unusual quarter,” said its founder and chief executive Jeff Bezos, the world’s richest man.

Apple posted revenue of $59.7 billion, up 11 per cent year-on-year despite store closures. The iPhone manufacturer announced a stock split plan under which it will give investors three additional shares of Apple for every share they own at the end of August. Its earnings per share came in at $2.58.

Alphabet recorded second-quarter revenue of $38.3 billion, while its earnings per share arrived at $10.13. Although this marked a decline in revenue, the drop was less than expected, with advertisers ravaged by the pandemic still relying on the internet giant to connect with people stuck at home.

Facebook reported an 11 per cent climb in revenue in the second quarter to $18.7 billion, while its earnings-per-share figure of $1.80 was up 98 per cent year-on-year. Almost all of its revenue comes from advertising, which rose 10 per cent to $18.32 billion in the quarter, which ended before the company was hit by an advertiser boycott in July.

The social media company also reported that it had 2.7 billion monthly active users, which was again ahead of market expectations.

The quarterly earnings were released after the close of Wall Street trading and a day after the chief executives of the four companies were quizzed at a US Congress hearing in Washington in relation to alleged anti-competitive practices.

The four companies, which have a combined market value of about $5 trillion, have led gains on the US stock market throughout 2020, as well as in preceding years.

When Microsoft is included, the value of the top five biggest companies on the S&P 500 has increased 266 per cent from the start of 2015 until the end of Tuesday, according to BCA Research.

In the same period, the value of the other 495 companies rose just 25 per cent.