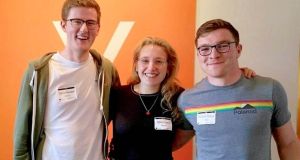 The Dublin-based mobile chat subscription start-up, has been described as “WhatsApp with community management functions.” It was founded last year by Patrick Finlay, Romy Lynch and David Newell.

The company has developed an app that like other messaging platforms such as WhatsApp enables sole traders such as business coaches, fitness trainers, nutritionists and personal stylists to communicate directly with clients via chat.

However, unlike those platforms, it also includes a number of administration features that enable them to easily moderate, manage and monetise interactions. The result is that individuals can build, grow and manage their businesses direct from their mobile phones.

The idea for the company came while the start-ups founders were participating on the Y Combinator start-up accelerator in San Francisco, having been selected for the programme while developing another product called Monaru.

“We realised there was a whole host of people who were providing services through chat who found it frustrating when trying to deal with payments through it because they would have to use other apps such as Venmo or Revolut for transactions, which made the whole thing messy,” said Mr Finlay, Quorum Chat’s chief executive.

“In addition, there are a large number of features either missing or problematic with messaging platforms for businesses, including potential privacy issues that arising from the fact that the likes of WhatsApp were built with an assumption that everyone knows each other. Our solution gets round such problems,” he added.

The investment, which was finalised during the Covid-19 lockdown, primarily via Zoom, is to be used to grow the company’s team of three and accelerate the growth of the subscription platform.

The funding round was co-led by Adjacent, a New York-based early-stage fund led by Nico Wittenborn, and by London-headquartered LocalGlobe. Y Combinator, one of the world’s best-known tech accelerators, whose alumni includes Stripe, Coinbase, Instacart and Reddit, also participated as did Amaranthine.

Amaranthine is a $50 million venture fund founded by Mr Cosgrave and fellow Web Summit co-founder David Kelly. The fund’s backers include Dublin and London-based VC Draper Esprit, and the company behind Web Summit, Manders Terrace, which has put at least €2 million into it.