Intel warns of delays to next generation of microchips

Chipmaker considers contracting out manufacturing to make up for delays 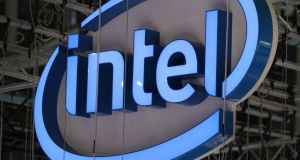 Intel forecasts that revenue will reach $75bn this year, compared with the $73.9bn that had been expected. Photograph: EPA

Intel has pushed back the planned launch of its next generation of chips by six months, throwing into doubt its efforts to regain the manufacturing edge it lost to TSMC in the current generation and wiping 10 per cent from its share price.

The US chipmaker also said it was considering contracting out more of its manufacturing to make up for the delays and ensure its products from 2023 onwards remain competitive.

The greater reliance on other manufacturers for advanced technology – with TSMC a likely beneficiary – marked a rare adjustment by a company which long led the global chip industry in successive generations of chips, where features grow progressively smaller and more computing power is squeezed into a tinier space.

It suffered several delays in moving to the current, 10 nanometre generation of chips, allowing TSMC to slip ahead. On Thursday it warned that its next generation of products, using 7nm technology, “was shifting six months relative to our prior expectations”.

Intel blamed the delay on difficulties in raising the yield – an important measure of manufacturing quality – from its early production of the chips. That had put it 12 months behind target in terms of manufacturing, though the company said it believed it could halve the impact of the delay on its products with more flexible chip designs.

The news brought testy questions from analysts on Intel’s regular quarterly earnings call. “I think investors are frustrated with how long the mis-execution on manufacturing has happened,” said Ross Seymor, an analyst at Deutsche Bank.

However, he said that the company had made “contingency plans” after its struggles with the 10nm transition, and that these would ensure that its products remained competitive even if it falls behind on process technology.

Mr Swan said one would come from squeezing an extra iteration of higher-performance chips out of its 10nm technology, while new chip designs would give it more scope to contract out production.

Intel “always has back-ups for its back-ups” to ensure it can handle manufacturing problems, said Patrick Moorhead, a US chip analyst. He said the company appeared to have designed an important new chip – a 7nm graphical processing unit codenamed Ponte Vecchio – so that it could be manufactured either in its own plants or those of TSMC.

Intel already contracts out some of its manufacturing, but it has not previously been forced to turn outside to tap advanced process technologies that it cannot match in-house.

News of the delay came as the company reported much stronger than expected quarterly earnings, boosted by the surge in online activity during the coronavirus pandemic, as well as a strong demand for new laptops from people working and learning from home.

Revenue from Intel’s data centre group jumped 43 per cent, to $7.1 billion, on strong demand from cloud providers trying to cope with the online activity.

Sales of PC chips rose 7 per cent to $9.5 billion. Overall that left Intel with revenue of $19.7 billion, an increase of 20 per cent and $1.1 billion ahead of expectations.

Intel also issued financial guidance for the rest of this year that could lay to rest some of the concerns about a sharp fall-off in chip sales in the second half as the first wave of the coronavirus-induced buying passes.

It forecast that revenue would reach $75 billion this year, compared with the $73.9 billion that had been expected. It had withdrawn full-year guidance three months ago amid the uncertainty caused by the pandemic.