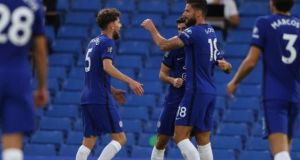 Chelsea is among the teams that works with Kitman Labs

The investment brings to $10.5 million the amount raised by the company over the last six months, and to more than $30 million since Kitman Labs was founded in 2012.

The financing is to be used to accelerate development of the company’s “core performance intelligence” platform, and introduce new products that address among other things Covid-19 safety concerns.

The move sees the fast-growing company moving far beyond its origins to become what co-founder and chief executive Stephen Smith described as an “operating system for the world of sports”.

The Dublin-headquartered company was established with the goal of reducing the risk of injury in professional sports by using artificial intelligence and data science to improve athletes’ health, welfare and performance. Mr Smith is a former injury rehabilitation and conditioning coach for Leinster Rugby.

Kitman Labs is now rolling out a number of additional features dealing with areas such as talent development, player-value assessment, and advanced Covid-symptom monitoring and testing.

Mr Smith said the move into Covid-related safety had already proven to be important for the company and its clients.

“Early on we established an early warning system for coronavirus, and immediately had some premiership rugby teams and some in the Bundesliga adopting it. And it has continued to grow legs, with us recently signing a deal with one of the major sporting leagues in the US to help them return to playing,” he told The Irish Times.

He said the business had continued to expand rapidly over the last quarter, with deals in North America and Asia completed.

QVIDTVM, an investment holding company established last year by Burak Alici, led the new investment. Mr Alici previously spent over a decade leading Morgan Stanley’s Global Discovery portfolio, a fund that, according to Bloomberg, outperformed about 97 per cent of its peers in the three years prior to his departure .

Among the individual teams the Irish company counts as clients are Chelsea, LA Galaxy and Bayer Leverkusen.

The company earlier this year made its first acquisition, snapping up English athlete data management company The Sports Office for an undisclosed sum.

It also recently announced plans to double staff numbers from 44 to 88, with most of those new roles based at its innovation centre in Dublin.