Back to the imagined future of the past with Paleofuture

Weblog: Matt Novak looks at crazy predictions from yesteryear – some of which came true 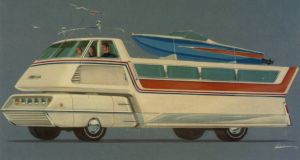 Matt Novak’s Paleofuture blog offers us a look back at the history of the future. That is to say, it’s all about retrofuturism: how the distant past imagined their future, with visions of motorised scooters from 1959 (they got it right!) and cars with an extra wheel that aided with parallel parking (sadly, this prediction from the 1930s never came to pass).

Novak’s blog is entertaining on several levels: we get to see film footage, illustrations and newspaper headlines – predominantly from post-war America – that induce a sense of nostalgia for an imaginary Jetsons future of flying cars with glass domes and conveyor-belt pedestrian pathways.

But he also provides commentary on what it got right and wrong, and what these visions say about the time we’re living in rather than the one we are trying to predict.

One of my favourites is a British Pathé reel from the 1960s looking at fashion in the year 2000. Eerily prescient, it shows a man in a pork pie hat wearing a collarless shirt and a hipster-geek polyester blend anorak. Everything from the waist down is very, very wrong – think sixties Captain Kirk in casual attire. Aside from this, they nailed the brief trend for military jackets (amongst emo bands and their followers).