Jumping cuboid bots could be key to emergency rescue 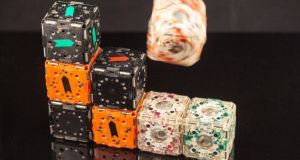 M-Blocks can hop, spin and flip into place when asked to form a shape

The robot revolution is upon us and it is adorable. M-Blocks are new self-organising cuboid robots designed by computer scientists at MIT. They think as part of a hive mind and each robot knows where it should be in relation to the others, hopping, spinning and flipping into place when asked to form a shape.

The cubes are, in fact, driven by an internal flywheel that moves at 20,000 revolutions per minute and each face has a magnet to allow it to attach to another bot.

In the future these kinds of jumping cube bots could be useful in emergency scenarios say the scientists who created them. For example, in the case of a burning building, the M-Blocks could be thrown on the ground where they would assemble into a temporary staircase to access and rescue occupants.