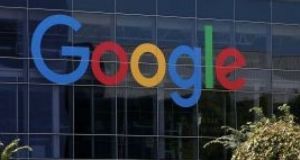 Google Ireland paid over €270 million in Irish corporation tax last year as it posted a record €1.68 billion in pre-tax profits, with turnover jumping by €5.9 billion to €38.1 billion.

Advertising accounts for “substantially all” of the revenue of the company which is ultimately owned by Alphabet.

Directors, who note that the business owns two data centres in Dublin, said they would continue to invest in new businesses, products and technologies. They added that they would “continue to provide competitive compensation programs in order to attract and retain high quality staff”.

The company attributed the 18 per cent increase in sales to a rise in advertising revenues. Profits at the Irish unit jumped by more than a quarter as the company improved its margins.

The newly-filed accounts show the tax charge for the year was €272 million, an effective rate of 16 per cent and versus a charge of €170 million in 2017.

The company said that after deducting the tax charge, some €1.41 billion was credited to reserves.

“2018 was a milestone year for Google as we celebrated 15 years in Ireland. Our Irish office continues to play a key role in our Europe, Middle East and African (EMEA) business. As well as growing our turnover, we also added over 300 new jobs in 2018,” a spokeswoman for the company said.

The latest accounts show cost of sales, which primarily consists of traffic acquisition charges, increased by €2.6 billion to €11.6 billion last year. In addition, administrative expenses rose to €25.1 billion from €21.9 billion due in part to the increase in headcount and an increase in sales and marketing efforts.

The Irish Times reported late last month that Google has entered into talks in relation to the rental of all 202,000sq ft (18,766sq m ) of space at the Sorting Office, the seven-storey office block being developed in the Dublin docklands by Pat Crean’s Marlet Property Group.

The tech giant, whose main operations in Dublin continue to be run from its European headquarters on Barrow Street and the nearby Montevetro building, has taken up space in a number of additional buildings in the capital.

It recently agreed to lease more than 75,000sq ft (7,000sq m) of office space in Block I at Green Reit’s Central Park scheme in Sandyford, Dublin 18.

The company’s employees are also based at the Grand Mill Quay building, the Velasco building on Grand Canal Street, and over several floors at businessman Denis O’Brien’s offices at One Grand Canal Quay. The company also has offices in Block L at Freeman House in Eastpoint Business Park.