Apple’s new line up is powered by own chips 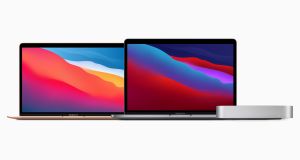 Apple delivered on its promise to release new MacBooks powered by its own chips, signalling the end of a partnership with intel that has lasted almost 15 years.

The tech giant unveiled a new MacBook Air, a 13-inch MacBook Pro and a new Mac mini powered by its new M1 chip. The MacBook Air promises up to twice the battery life of its predecessor

The move will also link the company’s mobile devices more closely with the Macs, opening up the possibility for developers to create apps that work with both computers and phones. Among the developers already committed to releasing new software for the M1-powered devices is Adobe, which will bring Photoshop to the new Macs early next year.

The M1 comes with big promises: efficiency, speed and improved battery life for the mobile devices, and more advanced functions for the Mac Mini that include artificial intelligence capabilities. The chip has an eight core central processing unit, and an eight-core graphics processing unit.

The M1 powered MacBook is not only faster than before, but the chip offers increased efficiency that stretches the battery to life to 18 hours of video playback, according to Apple. The 13-inch MacBook Pro will last for up to 20 hours.

Chief executive Tim Cook said the new chip was “a huge leap forward” for the line, and said it marked “a truly historic day for the Mac and for Apple”.

The new version of Apple’s operating system for Macs, Big Sur, has been engineered to get the most out of the new chip, offering a boost in performance. The software will be released later this week.

Apple first revealed its plans to use its own chips in June, building on a decade of building processors for the iPhone and iPad, which draw on computing architecture technology from UK-based Arm.

“Today, the Mac is stronger than ever. It continues to lead the industry in customer satisfaction as it has for over a decade and more customers than ever are choosing the Mac,” Mr Cook said, saying the Mac business had grown by more than 30 per cent in the last quarter.

Macs have seen sales surge during the pandemic, hitting a record of $9 billion in the fourth quarter.