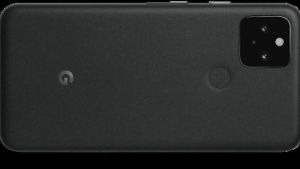 Google has been very busy on the smartphone front. Not only does it have the Pixel 4a and 4a 5G, it has also found time to squeeze in the flagship Pixel 5, which it is billing as the “ultimate” Google 5G phone.

But this year’s flagship is pitching at a slightly different market. Where the Pixel 4 and 4XL went after the top end of smartphone markets, this latest version has opted for a more modest target – and that has meant a few sacrifices. Rather than throwing everything plus the kitchen sink at the new device and seeing what sticks with customers, Google has decided to abandon a few of the more ambitious features of the Pixel 4 in favour of a more modest price tag.

Lookswise, the Pixel 5 isn’t quite as eye-catching as its predecessor. It’s a more muted look, with a black or sage green metal case, but that’s not necessarily a bad thing, with a case that looks like it can take a few bumps without shattering. More importantly, it’s significantly less slippery than its predecessor so maybe you won’t need to find out just how durable it is.

The display is quite impressive though, it’s a 6-inch display that is almost edge to edge, with Google shrinking down those bezels to practically nothing. The OLED technology makes everything look good, with a small hole punched out of the display for the camera.

The selfie camera has an interesting portrait mode. Once you snap your photo, you can change the lighting which can improve your portrait shots significantly. It’s a software rather than a hardware tweak and it isn’t exclusive to the Pixel 5, but it’s an interesting addition nonetheless.

On the inside, the Pixel 5 has 8GB of RAM and 128GB of storage. It has one flaw – there is no expandable storage space. Google gets around this with a subscription to Google One which gives extra cloud storage, but it will cost you after the trial period is up.

How powerful is the Pixel 5 though? It is powered by a Snapdragon 765G chip, considered a more mid-range chip. That’s one indication that this phone isn’t targeting the premium market this time out. That doesn’t cast any aspersions on its performance though; the 765G is still fast and the Pixel 5 doesn’t suffer from any performance issues.

Like the name suggests, the Pixel 5 has 5G built in, which might not be a deal-breaker for Irish users given that our 5G networks are still being built. But in six months or a year’s time, that may change so having it there is better than looking for it.

The Pixel 5 is a solid phone. It has a good camera, despite the lack of a telephoto lens, and includes convenient extras such as wireless charging. Google is going for value over cramming in as many features as possible. That means a more acceptable price, but you do lose a few features for that.

The Pixel strips out some of the more advanced technology we saw in the previous flagship, including the Project Soli radar chip and motion sense control. Google has said this was a cost decision and it may well prove to be the right move. But if you were looking for something a little more futuristic, then the Pixel 5 may disappoint with this decision. You have to ask though: will you really miss it?

Google has also ditched face recognition for unlocking the Pixel 5, which isn’t a bad thing in today’s Covid-19 world given that it won’t work most of the time anyway thanks to face masks. Instead, we return to the fingerprint reader on the back of the phone. The Pixel 5 can also be used as a wireless charging mat for your other devices which is a handy feature.

The Pixel 5 is a solid mid-range phone but it is facing tough competition from Samsung and OnePlus in that market.