Sony will launch Playstation 5 in the coming days 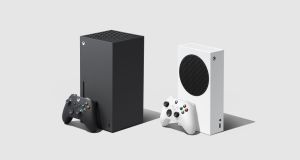 Microsoft has kicked off the next generation gaming war with the launch of two new consoles.

The Xbox Series X and Series S officially went on sale in shops today, but those hoping to pick one of the consoles up for Christmas may have a task on their hands, with preorders for the devices selling out weeks ago.

Microsoft was expecting to have some stock available, although would-be shoppers will have to move quickly.

The €500 Series X is the star of the show, with Microsoft claiming it is its most powerful yet, offering increased graphics power and advanced audio visual technologies. It comes with a 1TB solid state drive for storing games, and supports games from the previous console generation and beyond. The disc drive allows the console to play 4K UHD and Blu-Ray discs.

The design also enables the console to run much quieter than previous Xbox consoles, drawing power through a series of black and green vents of the top of the console.

The Series S is not only smaller in size but also in price, making a few sacrifices to offer a cheaper console. The €300 machine is a digital only console, eliminating the disc drive, and cuts down on some of the more high end graphics capabilities of the Series X. The less expensive console is a more accessible introduction to gaming, and would likely capture a younger market less concerned about 4K graphics.

The Series S may have less power - 4 teraflops to the Series X’s 12 – but it is similar to the outgoing generation such as the Playstation 4 Pro. It runs games at Quad HD – 1440p resolution – rather than 4K, although it will upscale and at 60 frames per second, although it supports up to 120 fps. There is 512GB of storage, which can be expanded.

It also keeps some of the more enticing features of its sibling, including raytracing technology, which allows the console to improve how games can render light and shadow. It also cuts down on load times significantly.

However, with the Playstation 5 launch following hot on its heels, Microsoft is facing tough competition. The Xbox Series X is debuting without a strong exclusive title to entice players, with a new Halo title delayed.

“Each studio is facing unique challenges and constraints depending on its particular location, and many of our external development partners around the world are similarly affected,” said Ryan Cameron, director at Xbox, EMEA.