Apple buys most of Intel’s smartphone chip business for $1bn 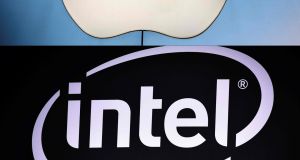 The deal will see Apple take on more than 2,000 Intel employees. Photograph: AFP

Apple has agreed to buy the majority of Intel’s smartphone modem chip business in a $1 billion (€897 million) deal, the companies announced on Thursday.

The phonemaker will acquire the intellectual property, equipment and leases relating to the business, and take on around 2,200 Intel employees, they said in a joint statement.

This year, Intel announced it was exiting the smartphone modem chip business after failing to produce a 5G chip. That prompted Apple to reconcile a years-long legal dispute with Intel’s rival Qualcomm, in hopes of being able to produce a 5G iPhone by 2020.

Apple entered into a multiyear licensing agreement for phone chips with Qualcomm, though Thursday’s deal could accelerate plans to develop its own in the long term.

“We’ve worked with Intel for many years and know this team shares Apple’s passion for designing technologies that deliver the world’s best experiences for our users,” said Johny Srouji, Apple’s senior vice-president of hardware technologies.

The acquisition will boost Apple’s number of wireless technology patents to over 17,000.

“This agreement enables us to focus on developing technology for the 5G network while retaining critical intellectual property and modem technology that our team has created,” said Intel chief executive Bob Swan

The deal is expected to close in the fourth quarter of 2019, subject to regulatory approval.

Intel shares were up more than 5 per cent in after-hours trading, while Apple shares were largely unchanged. – Copyright The Financial Times Limited 2019