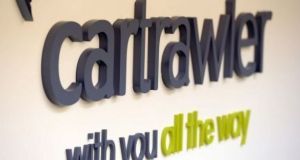 Irish travel tech company Cartrawler has reported flat revenues and a drop in profits for the first nine months to September last year as it invested heavily in the business amid a challenging environment.

The company, which develops car-hire software for airlines and travel agencies, said reservation volumes grew by 3 per cent over the period despite Brexit uncertainty and uncharacteristically warm weather in Northern Europe.

Accounts due to be filed later this week show CarTrawler reported turnover of €164 million for the first nine months of 2018. This compares to €201.7 million for full-year 2017.

The company, which last year changed its financial year to better reflect the seasonal nature of the business, said earnings before interest, tax, depreciation and amortisation (ebitda) totalled €20.3 million in the nine months to the end of September 2018, as against €31.7 million in 2017.

Cartrawler also reported pre-tax profits of €6.6 million for the nine months to the end of September, versus €19.9 million for the twelve months ending December 2017. In addition to the impact of the change to its financial year end, the group attributed the decline in profits to significant investments in the business and a one-off €1.4 million restructuring charge.

The company said it has invested €10 million in headcount costs since 2016 with €5.6 million put into R&D last year.

Chief executive Cormac Barry said recent investments in the business are expected to drive “considerable future growth” for the company in the years ahead.

“2018 was a foundation year for the business in terms of investment and we’re already seeing the benefits of that flowing through into 2019,” said Mr Barry, who was previously head of Paddy Power Betfair’s Sportsbet business in Australia.

Chief finance officer David Cotter added the business was trading in line with expectations so far this year and expected the company to return to double-digit growth in 2019.

The company earlier this month introduced a new travel mobility platform that allows carriers to offer airport transfer services, including ride-hailing options such as Uber or Lyft for customers.

“The airport transfers market is estimated at €36 billion globally so it is a very significant opportunity because many more people will get a transfer than will hire a car,” said Mr Barry.

Mr Barry said the company was looking at rolling out additional services including in-destination activities, ticketing and airport parking to its platform in the future.

CarTrawler currently has about 100 airlines and 2,500 online travel brand partners on its books, including Ryanair, Vueling Air Portugal, Thomas Cook Airlines and Norwegian. Over the last 12 months, the company said it recorded a number of new partner wins, including with Alaska Airlines, the sixth largest carrier in the US, and online travel agency eDreams Odiegeo.

Founded by brothers Greg and Niall Turley in 2004, who grew it out of their family business Argus Car Hire, CarTrawler is now owned by BC Partners and Insight Venture Partners. The company, which is headquartered in Dublin with additional offices in Tokyo, Helsinki, Manilla, Boston and Sydney, employed over 500 people last year.

Mr Barry said Cartrawler has a strong sales pipeline, particularly in North America, where it is looking to grow market share. It recently opened an office in New York and appointed travel industry veteran Charlie Coniglio as senior vice president for the region.

“North America is currently at 15 per cent of revenues but we’re looking to get that up to about 25 per cent and then grow from there,” he said.