Telecoms firm plans to use proceeds to connect 450,000 homes to its service 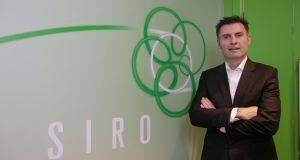 Broadband provider Siro has secured €200 million in capital from a syndicate of international banks to fund the next phase of its rollout.

The company, a joint venture between the ESB and Vodafone, has already spent €250 million on its fibre-to-the-home (FTTH) network, which is now live in 45 regional towns and urban areas.

Siro said it had secured a €200 million funding package from a syndicate of five international banks including Ulster Bank, NatWest, HSBC, BNP Paribas and Royal Bank of Canada.

The proceeds will be used to accelerate the company’s business plan to connect 450,000 homes and businesses to a full fibre one gigabit (1,000 megabits) service, it said.

The debt, a five-year revolving credit facility led by NatWest, is the largest debt investment dedicated entirely to an FTTH rollout in Ireland.

“The seal of approval by these banks, who are major investors in European infrastructure, is testament to the quality of our business model and people,” Siro chief executive John Keaney said. “They recognise how fibre-to-the-building broadband is transforming how people access and experience content,” he said.

Siro, a wholesale provider, is building a fibre broadband network across the ESB’s infrastructure, which runs into nearly every household and business in the State.

While its original business plan was to target regional towns such as Dundalk, Navan, Letterkenny, it has now moved into the cities rolling out its network in Cork and Galway and in areas such as Swords, Finglas and Carrickmines in Dublin.

There are currently 10 retailers, including Vodafone, Digiweb, Sky and BT, operating off its platform and offering services to more than 250,000 homes.

The plan is to extend this to 450,000 homes, which would give it a 25 per cent share of the Ireland’s fast-growing fibre market.

Siro is in a fibre arms race with market incumbent Eir, which is offering its own fully fibre product to more than 300,000 homes, and is also building out its network with a €500 million war chest.

In his inaugural speech as British prime minister Boris Johnson outlined his priorities which included, building a full FTTH network to all homes in UK by 2023.