Will Samsung’s foldable phone have been worth the wait?

Q&A: Even the most cynical among us would have winced when the $2,000 price tag was revealed 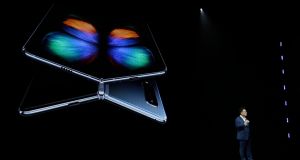 The launch of the Samsung Galaxy Fold smartphone in February. Photograph: Eric Risberg/AP

To much fanfare, Samsung launched its foldable phone, the Galaxy Fold, in February for a price tag just shy of $2,000 (€1,796). The all-singing, all-dancing phone can multitask, we were told, and came with no less than six cameras. And, it would hit markets on April 26th. Except it didn’t.

Now, however, Samsung has told us production of the device is back on track with plans to launch it in September.

What does the phone do?

The Galaxy Fold is not your average smartphone: its foldable display transforms from a phone into a tablet when it is opened. It can multitask, displaying three different apps on the tablet screen and it has a plethora of cameras.

Why has its release been delayed?

Just eight days before it was originally due to release the phone, Samsung said it had received “a few” reports of damage to the displays of some of the units that had been sent out to journalists for review. There were some reports of the screen cracking or flickering while others reported a tear at the top of the hinge where the phone opened.

The company then made the decision to abort the commercial release of the mobile, which was to have been a crowning achievement in its ongoing fight against rivals Apple and Huawei.

What did the delay mean for Samsung?

Unlike when the South Korean manufacturer had to recall the Note 7, Samsung had only predicted about 1 million units of the Fold to sell this year. That compares with the 291 million smartphones it shipped in 2018. Financially, at least, it wasn’t as big a deal as previous issues but it was a public relations disaster.

And while it has recovered from the Note 7 debacle, which wiped €13 billion off its share price in the early days of the issue, it doesn’t want to risk another mass recall. Sorting the problems now rather than later was a shrewd move.

Samsung has redesigned the Fold, adjusting the protective film - that users were able to tear off - so it wraps around the entire screen and flows into the outer edges, rendering it impossible to peel off by hand. It has also re-engineered the hinge, pushing it slightly upward from the screen to help stretch the film further when the phone opens.

Is the Galaxy Fold likely to set off another mobile phone war?

Without a doubt. Only days after Samsung unveiled the Galaxy Fold, Huawei revealed its own folding phone, the Mate X. Xiaomi is also entering the foldable market, so being first would give Samsung a foothold ahead of of the competition.

But the Huawei phone differs from Samsung’s in one important way – it folds outwards instead of inwards. According to experts, that outward fold puts less pressure on the screen so it is less likely to suffer from similar issues.

Nevertheless, Huawei’s phone has also been delayed and there’s still no sign of it launching. Not to mention the fact that Huawei has been caught up in the crosshairs of the US-China trade spat.

Is the Galaxy Fold worth it?

The price tag is eye popping. To put it in context, it is more expensive than Apple’s top-end 12.9in iPad Pro and likely to be more expensive here than one of Samsung’s own Frame 55-inch TVs. However, it has the potential to be the most advanced phone on the market when it eventually launches.

Where does Apple come into this?

That’s where it gets interesting. Samsung has timed the launch of its Galaxy Fold for the same month when Apple typically announced new iPhones. Reports today suggested that Apple suppliers are gearing up to produce components for up to 75 million new devices. Apple’s march has been halted, however, by Huawei’s rise in China and the Sino-US trade war. Whether it can be further stopped by Samsung’s Galaxy Fold remains to be seen.

1 Corona beer firm reeling after 8% slide due to coronavirus
2 Life as a Facebook moderator: ‘People are awful. This is what my job has taught me’
3 Pharma giant AbbVie warned Government against ‘unfair’ €572m tax bill
4 Why Irish banks are now looking beyond vulture funds on problem loans
5 We have little chance of building enough homes to meet election promises
Real news has value SUBSCRIBE